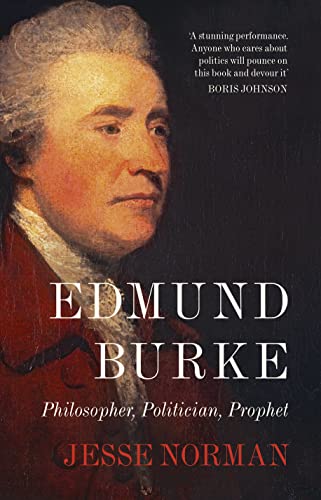 Longlisted for the Orwell Prize and the Samuel Johnson prize for non-fiction; both conservative and subversive, Burke's beliefs have never been more relevant than in today's `Big Society', as MP Jesse Norman explains.

Longlisted for the Orwell Prize and the Samuel Johnson prize for non-fiction; both conservative and subversive, Burke's beliefs have never been more relevant than in today's `Big Society', as MP Jesse Norman explains.

Philosopher, statesman, and founder of modern conservatism, Edmund Burke is both the greatest and most under-rated political thinker of the past three-hundred years. Born in Ireland in 1729, and greatly affected by its bigotry and extremes, his career constituted a lifelong struggle against the abuse of power.

Amid the 18th century's golden generation that included his companions Adam Smith, Samuel Johnson and Edward Gibbon, Burke's controversial mixture of conservative and subversive theories made him first a marginal figure, and finally a revered theorist - a hero of the Romantics. He warned of the effects of British rule in Ireland, the loss of the American colonies, and most famously, he foresaw the disastrous consequences of revolution in France. This he predicted, would trigger extremism, terror and the atomisation of society - a profound analysis that continues to resonate today.

In this absorbing new biography Conservative MP Jesse Norman gives us Burke anew, vividly depicting his dazzling intellect, imagination and empathy against the rich tapestry of 18th century Europe. Burke's wisdom, Norman shows, applies well beyond the times of empire to the conventional democratic politics practised in Britain and America today. We cannot understand the defects of the modern world, or modern politics, without him.

`Jesse Norman has brought back Burke in triumph. This is an overdue reassessment of a politician who was the father of the modern political party, a man who campaigned with equal brio and genius against British exploitation of India and the bloody tyranny of the French Revolution. Anyone who cares about politics will pounce on this book and devour it' Boris Johnson

`A must-read for anyone interested in politics and history ... Superb' Matthew D'Ancona, Sunday Telegraph

`An excellent book, which unites biographical and political insights. The best short biography of Burke for nearly fifty years ... and a pleasure to read' Harvey Mansfield, Professor of Government, Harvard University

`[Norman] is a subtle historian of ideas. He does an excellent job of extracting from his subject's speeches and writings why, in his view, Burke is the first and most important conservative thinker' Charles Moore, Daily Telegraph

`His new book on Edmund Burke seeks to contest the very nature of today's Tory Party. All power to his elbow ... quite brilliantly, Norman ... [offers] an immense critique of the present ... It is a patriotic tract and an act of great leadership. This is a very significant book' Independent

`Personable and thoughtful, [Norman] also has a cavalier streak ... This absorbing book gathers pace, and relevance, as it goes along - an important contribution to the annals of conservative thought' Observer

`Norman is undoubtedly a fluent and deep thinker ... his account of Burke's life and career is as good as any of equal length on the subject ... Admirable' Spectator

`Superb ... Norman succeeds in elevating his subject, showing what is conservative about Burke, and why he matters today. Ironically, he makes such a strong case that it would seem perverse if only Tories took something from Burke's legacy' Financial Times

Jesse Norman is the Member of Parliament for Hereford and South Herefordshire, and a Senior Fellow of Policy Exchange. He is a frequent op-ed contributor in the national press, has written numerous pamphlets and papers, including `Compassionate Conservatism', and blogs on www.jessenorman.com. In 2012 he was awarded Parliamentarian of the Year and Backbencher of the Year. This is his first biography.

GOR005570639
Edmund Burke: Philosopher, Politician, Prophet by Jesse Norman
Jesse Norman
Used - Very Good
Hardback
HarperCollins Publishers
2013-05-09
320
0007489625
9780007489626
N/A
Book picture is for illustrative purposes only, actual binding, cover or edition may vary.
This is a used book - there is no escaping the fact it has been read by someone else and it will show signs of wear and previous use. Overall we expect it to be in very good condition, but if you are not entirely satisfied please get in touch with us.