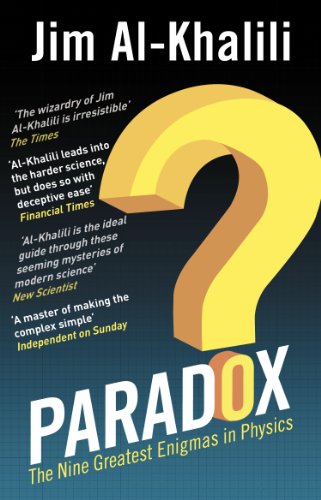 Paradox: The Nine Greatest Enigmas in Physics by Jim Al-Khalili

Jim Al-Khalili is about to untangle the world's greatest science conundrums... ___________ How does the fact that it gets dark at night prove the Universe must have started with a big bang? Where are all the aliens? Why does the length of a piece of string vary depending on how fast it is moving? Our subject is 'perceived paradoxes' - questions or thought-experiments that on first encounter seem impossible to answer, but which science has been able to solve. Our tour of these mind-expanding puzzles will take us through some of the greatest hits of science - from Einstein's theories about space and time, to the latest ideas of how the quantum world works. Some of our paradoxes may be familiar, such as Schroedinger's famous cat, which is seemingly alive and dead at the same time; or the Grandfather Paradox - if you travelled back in time and killed your grandfather you would not have been born and would not therefore have killed your grandfather. Other paradoxes will be new to you, but no less bizarre and fascinating. In resolving our paradoxes we will have to travel to the furthest reaches of the Universe and explore the very essence of space and time. Hold on tight.

"The wizardry of Jim Al-Khalili is irresistible. Marvel at the mind-bending Zeno's paradox! The amazing ambiguity of Schroedinger's Cat! The preposterous postulations of perpetual motion! The extraterrestrial extrapolations of Fermi's paradox! and other wonders of physics, philosophy, even poetry. "I have had tremendous fun writing this book," says Professor Jim. Reading it is the best fun you can have beyond a pop-science comic book and a home particle accelerator" * The Times *
"A master of making the complex simple" * Independent on Sunday *
"Al-Khalili leads into the harder science, but does so with such deceptive ease that before you know it you're mulling over the expanding universe, staring down quantum theory and pondering Schroedinger's Cat - and enjoying it" * Financial Times *
"Al-Khalili is the ideal guide through these seeming mysteries of modern science" * New Scientist *
"[A] field guide to some of the most important and fascinating conundrums in physics" * Science *

Professor Jim Al-Khalili, OBE is an academic, author and broadcaster. He is a leading theoretical physicist based at the University of Surrey, where he teaches and carries out research in quantum mechanics. He has written a number of popular science books, translated so far into 20 languages, with his most recent being Pathfinders: The Golden Age of Arabic Science. He has presented several television and radio documentaries, including the BAFTA-nominated Chemistry: A Volatile History and The Secret Life of Chaos. He presents the weekly programme The Life Scientific on BBC Radio 4. He was awarded the 2007 Royal Society Michael Faraday medal and the 2011 Institute of Physics Kelvin medal, both for his science communication work.

GOR004691545
Paradox: The Nine Greatest Enigmas in Physics by Jim Al-Khalili
Jim Al-Khalili
Used - Very Good
Paperback
Transworld Publishers Ltd
2013-04-25
304
0552778060
9780552778060
N/A
Book picture is for illustrative purposes only, actual binding, cover or edition may vary.
This is a used book - there is no escaping the fact it has been read by someone else and it will show signs of wear and previous use. Overall we expect it to be in very good condition, but if you are not entirely satisfied please get in touch with us.