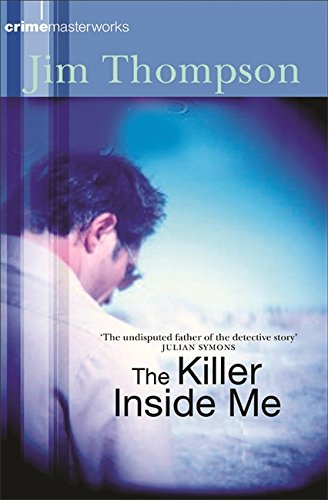 The Killer Inside Me
by Jim Thompson

New Price
8,99 £
Free Shipping in the UK
THE KILLER INSIDE ME has been a cult classic since its first publication in 1952. Also a major motion picture starring Casey Affleck, directed by Michael Winterbottom.
Reviews:
Trustpilot
New8,99 £

The Killer Inside Me Summary

The Killer Inside Me by Jim Thompson

THE KILLER INSIDE ME has been a cult classic since its first publication in 1952. Also a major motion picture starring Casey Affleck, directed by Michael Winterbottom.

Deputy Sheriff Lou Ford is a pillar of the community in his small Texas town, patient and thoughtful. Some people think he's a little slow and boring but that's the worst they say about him. But then nobody knows about what Lou calls his 'sickness'. It nearly got him put away when he was younger, but his adopted brother took the rap for that.

Now the sickness that has been lying dormant for a while is about to surface again - and the consequences are brutal and devastating. Tense and suspenseful, THE KILLER INSIDE ME is a brilliantly sustained noir crime masterpiece.

Customer Reviews - The Killer Inside Me

The Killer Inside Me Reviews

I don't read many books twice but Jim Thompson novels - due to their concise, dirty power, their relentless violence and purity - can always draw me in for a second time. Some of the most psychological crime writing ever done. I love James M Cain and Elmore Leonard but Jim Thompson holds a special place in my heart. -- Bruce Springsteen

Jim Thompson (1906-1977) was born in Anadarko, Oklahoma. After an itinerant childhood during which his sheriff father was driven from office for embezzlement; and as a roughneck in the Texan oil fields of the 1920s, Thompson became successful as a writer with the pulp fiction houses of the 1950s, writing a dozen of his more enduring novels in just 19 months. Among his many novels are THE KILLER INSIDE ME, THE GRIFTERS, THE GETAWAY and AFTER DARK, MY SWEET. He also wrote two screenplays (for the Stanley Kubrick films THE KILLING and PATHS OF GLORY). pop. 1280 was an acclaimed French film under the title COUP DE TORCHON.