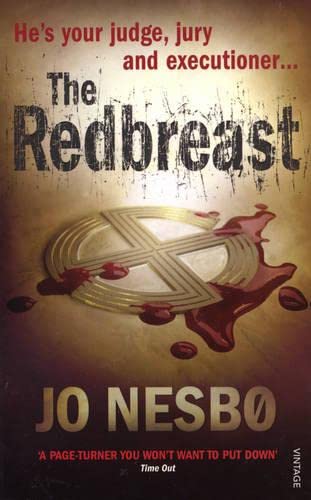 The Redbreast
by Jo Nesbo

In Stock
£4.49
Harry Hole, drunkard, loner and brilliant detective is reassigned to surveillance after a high profile mistake. Next Harry's former partner is murdered. In a quest that takes him to South Africa and Vienna, Harry finds himself perpetually one step behind the killer.
Very Good
16 in stock

Harry Hole, drunkard, loner and brilliant detective is reassigned to surveillance after a high profile mistake. He's bored by his new job until a report of a rare and unusual gun being fired sparks his interest because of its possible links to Neo Nazi activity. Then a former soldier is found with his throat cut. Next Harry's former partner is murdered. Why had she been trying to reach Harry on the night her head was smashed in? The investigation leads Harry to suspect that the crimes have their roots in the battlefields of Eastern Front during WWII. In a quest that takes him to South Africa and Vienna, Harry finds himself perpetually one step behind the killer. He will be both winner and loser by the novel's nail-biting conclusion. The Redbreast. He's your judge, jury and executioner... And he must be stopped

"A page-turner you won't want to put down" * Time Out *
"Scary...culminates in a nail-biting episode with overtones of The Day of the Jackal" * Independent *
"A complicated story of passion, lost love, betrayal and murder" * The Times *
"A complex, utterly captivating story" * Evening Standard *
"Exciting, witty, melancholy and thought-provoking" * Daily Telegraph *

Jo Nesbo, musician, economist and author of the best-selling series featuring Detective Harry Hole, has won many prizes for his novels, including the Glass Key, the Riverton Prize and the Norwegian Bookclub prize for best ever Norwegian crime novel. His first novel to be published in English was The Devil's Star, which sold more than 100,000 copies in Norway alone. He lives in Oslo.

GOR000746249
The Redbreast: Harry Hole 3 by Jo Nesbo
Jo Nesbo
Harry Hole
Used - Very Good
Paperback
Vintage Publishing
2007-10-02
640
0099478544
9780099478546
N/A
Book picture is for illustrative purposes only, actual binding, cover or edition may vary.
This is a used book - there is no escaping the fact it has been read by someone else and it will show signs of wear and previous use. Overall we expect it to be in very good condition, but if you are not entirely satisfied please get in touch with us.