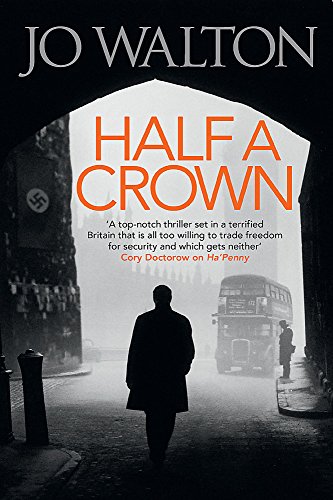 Half A Crown
by Jo Walton

Half A Crown Summary

Half A Crown by Jo Walton

In 1941 the European war ended in the Farthing Peace, a rapprochement between Britain and Nazi Germany. The balls and banquets of Britain's upper class never faltered, while British ships ferried "undesirables" across the Channel to board the cattle cars headed east.

Peter Carmichael is commander of the Watch, Britain's distinctly British secret police. It's his job to warn the Prime Minister of treason, to arrest plotters, and to discover Jews. The midnight knock of a Watchman is the most dreaded sound in the realm.

Now, in 1960, a global peace conference is convening in London, where Britain, Germany, and Japan will oversee the final partition of the world. Hitler is once again on British soil. So is the long exiled Duke of Windsor - and the rising gangs of "British Power" streetfighters, who consider the Government "soft," may be the former king's bid to stage a coup d'etat.

Amidst all this, two of the most unlikely persons in the realm will join forces to oppose the fascists: a debutante whose greatest worry until now has been where to find the right string of pearls, and the Watch Commander himself.

Customer Reviews - Half A Crown

Half A Crown Reviews

Walton's understated prose and deft characterizations elevate this above similar works such as Fatherland and SS-GB. * Publishers Weekly *

Jo Walton comes from Wales but lives in Montreal, where the food and books are much better. She writes science fiction and fantasy, reads a lot, talks about books, and eats great food. She plans to live to be ninety-nine and write a book every year.

GOR005582503
Half A Crown by Jo Walton
Jo Walton
Small Change
Used - Very Good
Paperback
Little, Brown Book Group
2014-02-06
320
1472112997
9781472112996
N/A
Book picture is for illustrative purposes only, actual binding, cover or edition may vary.
This is a used book - there is no escaping the fact it has been read by someone else and it will show signs of wear and previous use. Overall we expect it to be in very good condition, but if you are not entirely satisfied please get in touch with us.