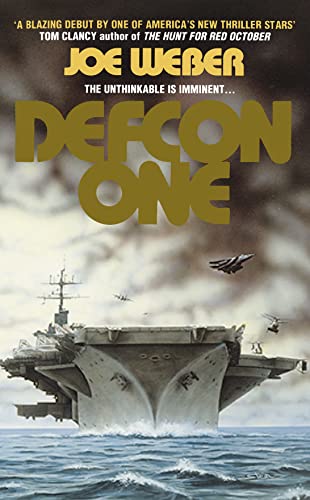 Defcon One
by Joe Weber

From the acclaimed thriller writer, Joe Weber, comes a chilling novel of the Cold War.

Defcon One by Joe Weber

From the acclaimed thriller writer, Joe Weber, comes a chilling novel of the Cold War.

The United States and Soviet Union are at the brink of war. Fearful of US plans for an anti-missile defense system, the Soviet General Secretary conceives a plan to act first.

Russian Bear bombers violate US airspace, leading to a response by American F-15s. A US Navy battle group is attacked in the North Atlantic. And in orbit, a Soviet hunter-killer satellite attacks an American space shuttle.

As the world careens towards a nuclear conflict, only a lone CIA operative stands between peace and utter destruction. But can he act in time?

Vividly portraying the real world of military hardware and combining it with page-turning action, DEFCON One is the definition of a classic thriller.

Praise for Defcon One:

As a former fighter pilot, Joe Weber knows his subject well. He served in the United States Marine Corps from 1970-1975. A carrier-qualified fighter/attack trained pilot, he graduated first in his class from advanced naval jet pilot training in Texas, in 1972. After his release from active duty, he flew commercially until 1989 when his first novel was published.

His novels have appeared on the bestseller lists of the New York Times, Publishers Weekly, the Associated Press, and the Chicago Tribune

Mr. Weber is a native of Enid, Oklahoma, and lives near Pensacola, Florida, with his wife Jeannie.

GOR005043013
Defcon One by Joe Weber
Joe Weber
Used - Very Good
Paperback
HarperCollins Publishers
1991-07-11
400
0586209824
9780586209820
N/A
Book picture is for illustrative purposes only, actual binding, cover or edition may vary.
This is a used book - there is no escaping the fact it has been read by someone else and it will show signs of wear and previous use. Overall we expect it to be in very good condition, but if you are not entirely satisfied please get in touch with us.