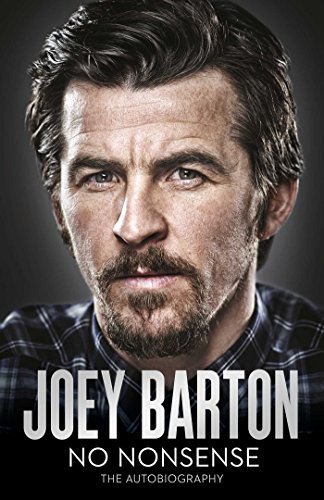 No Nonsense by Joey Barton

The explosive and compelling autobiography of Joey Barton, football's most intriguing personality

No Nonsense: The Autobiography by Joey Barton

So, you think you know Joey Barton. Think again. No Nonsense is a game-changing autobiography which will redefine the most fascinating figure in British football. It is the raw yet redemptive story of a man shaped by rejection and the consequences of his mistakes. He has represented England, and been a pivotal player for Manchester City, Newcastle United, Queens Park Rangers, Marseille, Burnley and Glasgow Rangers, but his career has featured recurring controversy. The low point of being sent to prison for assault in 2008 proved to be the catalyst for the re-evaluation of his life.

No Nonsense reflects Barton's character - it is candid, challenging, entertaining and intelligent. He does not spare himself, in revealing the formative influences of a tough upbringing in Liverpool, and gives a survivor's insight into a game which, to use his phrase, 'eats people alive'. The book is emotionally driven, and explains how he has redirected his energies since the birth of his children. In addition to dealing with his past, he expands on his plans for the future. The millions who follow his commentaries on social media, and those who witnessed him on BBC's Question Time, will be given another reason to pause, and look beyond the caricature.

'Brilliant' Matt Lawton, Daily Mail
LONGLISTED FOR THE WILLIAM HILL SPORTS BOOK OF THE YEAR
'Barton's compelling autobiography...probes the dark undertow of his past' -- Donald McRae * Guardian *
'The book is brilliant and in many ways as No Nonsense as the title claims' -- Matt Lawton * Daily Mail *
'Frequently jaw-dropping' -- Matt Dickinson * The Times *
'Brilliant, gripping, beautifully written, real' -- Jonathan Northcroft
'Powerful story...It is superbly written...What makes Barton's book engaging is the candour with which he describes his personal crusade against the demons of violence in his nature and the revelation of inside track details' * Daily Express *
`...this tale of a council estate "scally" (his word) made good through grit, determination and the learning from setbacks is far more than a football book' * The i *
`Book of revelations: No Nonsense is, to all intents and purposes, Joey Barton: The Director's Cut. Unshackled from the limitations of Twitter's 140 characters, expanded and coloured in with the help of an articulate ghost writer, Michael Calvin. Together they lay waste to the "superficial bollocks" of the modern game' * When Saturday Comes *
`This is a terrific book, one of the best I've read. There aren't many I've read and finished and thought damn I've finished. This is one of them' * Sportnetwork.net *
`One of the most remarkable and candid sports books of the year' -- Terry Staunton * When Saturday Comes *
Joey Barton was born in Huyton, Merseyside, in 1982 and has played football for Manchester City, Newcastle United, QPR, Marseille, Burnley and Glasgow Rangers winning one cap for England. A controversial figure who was involved in numerous altercations, he was sentenced to six months in prison in 2008 for assault. More recently, Barton has appeared on BBC's Question Time and developed a huge following on social media.
GOR007850686
9781471147586
1471147584
No Nonsense: The Autobiography by Joey Barton
Joey Barton
Used - Very Good
Hardback
Simon & Schuster Ltd
2016-09-22
352
Winner of Cross Sports Book Awards Autobiography of the Year 2017
Book picture is for illustrative purposes only, actual binding, cover or edition may vary.
This is a used book - there is no escaping the fact it has been read by someone else and it will show signs of wear and previous use. Overall we expect it to be in very good condition, but if you are not entirely satisfied please get in touch with us
Trustpilot