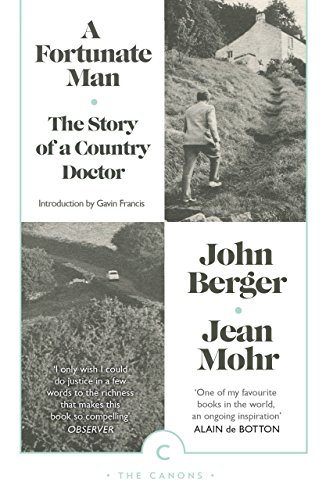 A Fortunate Man by John Berger

Berger's exploration of what it means to heal, now inducted into the Canons series nearly fifty years after its first publication

A Fortunate Man: The Story of a Country Doctor by John Berger

In 1966 John Berger spent three months in the Forest of Dean shadowing an English country GP, John Sassall. Sassall is a fortunate man - his work occupies and fulfils him, he lives amongst the patients he treats, the line between his life and his work is happily blurred.

In A Fortunate Man, Berger's text and the photography of Jean Mohr reveal with extraordinary intensity the life of a remarkable man. It is a portrait of one selfless individual and the rural community for which he became the hub. Drawing on psychology, biography and medicine A Fortunate Man is a portrait of sacrifice. It is also a profound exploration of what it means to be a doctor, to serve a community and to heal.

With a new introduction by writer and GP, Gavin Francis.

In 1967 A Fortunate Man marked the most significant step forward in the collaboration of a writer and photographer since Let us Now Praise Famous Men by Walker Evans and James Agee. Incredibly, it still does . . . A masterpiece -- GEOFF DYER
It's one of my favourite books in the world, an ongoing inspiration as to how books should be written (and photography used) -- ALAIN de BOTTON
A genuine tour de force . . .The intimate portrait of one man and his microscopic world reveals the faults and strains of a whole society * * OBSERVER * *
I only wish I could do justice in a few words to the richness that makes this book so compelling * * GUARDIAN * *
John Berger seems to me peerless; not since Lawrence has there been a writer who offers such attentiveness to the sensual world with responsiveness to the imperatives of conscience * * SUSAN SONTAG * *
A book about caring that will make you care, and a book about deep healing that may heal your soul. It is also, almost 50 years on, uncannily timely -- SIMON GARFIELD
This disturbingly beautiful book will continue to haunt you long after you have set it aside -- RICHARD HOLLOWAY
This extraordinary book unravels the tangled branches of the everyday to reveal the brightness within. It inspires me to think more slowly, more deeply, to wear acquired knowledge lightly, to open my senses more fully to the wonders in the plain and close-at-hand -- JAMES MEEK
A masterpiece of witness; a three-way meditation on humanity, society and the value of healing -- GAVIN FRANCIS

John Berger was born in London in 1926. His seminal Ways of Seeing was one of the most influential books on art in the 20th century. His many books, innovative in form and far-reaching in their historical and political insight, include To the Wedding, King, and the Booker Prize-winning novel, G. He lived and worked in a small village in the French Alps, the setting for his trilogy Into Their Labours (Pig Earth, Once in Europa and Lilac and Flag). In 2001, his collection of essays The Shape of a Pocket was published, and his Understanding a Photograph, edited by Geoff Dyer, was published in 2013. He died, aged 90, in January 2017.

Jean Mohr is a Swiss documentary photographer. He has worked with the Red Cross, the World Health Organization, and the International Labour Organization.He has produced 26 books of photography, five with his literary collaborator John Berger and one with Edward Said. In 1956 he married Simone Turrettini, a documentary filmmaker. They have two sons and four grandchildren.

GOR008661707
9781782115038
178211503X
A Fortunate Man: The Story of a Country Doctor by John Berger
John Berger
Canons
Used - Like New
Paperback
Canongate Books Ltd
2016-02-04
176
N/A
Book picture is for illustrative purposes only, actual binding, cover or edition may vary.
The book has been read, but looks new. The book cover has no visible wear, and the dust jacket is included if applicable. No missing or damaged pages, no tears, possible very minimal creasing, no underlining or highlighting of text, and no writing in the margins
Trustpilot