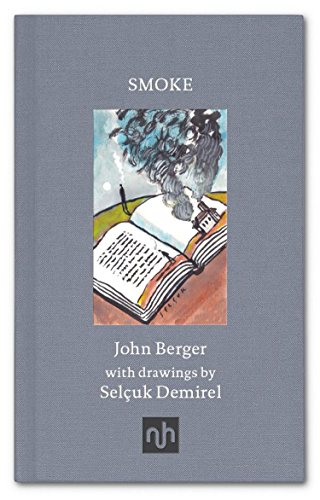 Following the success of Cataract, John Berger, one of the great soothsayers of seeing, joins forces again with Turkish illustrator Selcuk Demirel. This charming pictorial essay reflects on the cultural implications of smoking. A subtle and beautifully illustrated prose poem, Smoke lingers in the mind.

"Once upon a time, men, women and (secretly) children smoked."

This charming illustrated work reflects on the cultural implications of smoking, and suggests, through a series of brilliantly inventive illustrations, that society's attitude to smoke is both paradoxical and intolerant. It portrays a world in which smokers, banished from public places, must encounter one another as outlaws. Meanwhile, car exhausts and factory chimneys continue to pollute the atmosphere. Smoke is a beautifully illustrated prose poem that lingers in the mind.

"In these pages, Demirel rather brilliantly provides images of togetherness that make literal Berger's language, albeit without sentimentalizing it; these pictures recall a world that once had coherent meaning...Berger and Demirel show that nearly anything can be part of shared experience...Smoke, [Berger] concludes, is a 'sign of mankind'--evidence not of man's endurance but of the promise of companionship and stories shared." --Jonathon Sturgeon, Art in America

"In contemporary English letters John Berger seems to me peerless. Not since D. H. Lawrence has there been a writer who offers such attentiveness to the sensual world with responsiveness to the imperatives of conscience." --Susan Sontag

"I love this small book of intricate insight." --Michael Ondaatje, (on Cataract)

"In his ceaselessly inventive work, Sel uk often uses parts of the body in ways that are characteristically Turkish...as if the comedy of the human condition were there in the human body, in the melancholy of anatomy." --John Berger, on Sel uk Demirel

John Berger was an English art critic, novelist, painter and poet. His novel G won the 1972 Booker Prize, and his essay on art criticism Ways of Seeing, written as an accompaniment to a BBC series, is often used as a university text. John Berger died 2 January 2017. Selcuk Demirel was born in Turkey and lives in Paris. His illustrations have been featured in major publications all over the world including Le Monde Diplomatique, the World and the New Observer, The Washington Post, The New York Times, The Wall Street Journal, and The Boston Globe.
NGR9781910749470
9781910749470
1910749478
Smoke: 2017 by John Berger
John Berger
New
Hardback
Notting Hill Editions
2017-03-23
66
N/A
Book picture is for illustrative purposes only, actual binding, cover or edition may vary.
This is a new book - be the first to read this copy. With untouched pages and a perfect binding, your brand new copy is ready to be opened for the first time
Trustpilot