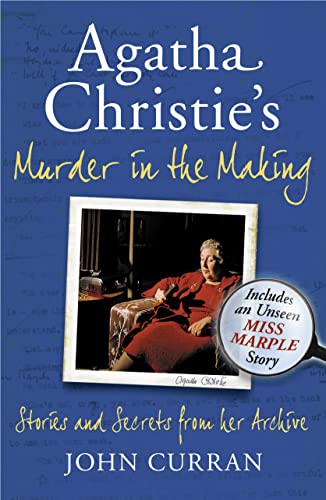 Agatha Christie's Murder in the Making
by John Curran

Agatha Christie's life and career told through the decades, from the never-before-published original ending to her first book to the unused ideas for her last, complete with two unpublished Agatha Christie stories - including a lost Miss Marple.

Agatha Christie's Murder in the Making: Stories and Secrets from Her Archive - includes an unseen Miss Marple Story by John Curran

Agatha Christie's life and career told through the decades, from the never-before-published original ending to her first book to the unused ideas for her last, complete with two unpublished Agatha Christie stories - including a lost Miss Marple.

In this follow-up volume to the acclaimed Agatha Christie's Secret Notebooks, Christie archivist and expert John Curran leads the reader through the six decades of Agatha Christie's writing career, unearthing some remarkable clues to her success and a number of never-before-published excerpts and stories from her archives.

Starting his investigation in the 1920s, John Curran examines the conventions of detective novels as they existed then and how Agatha Christie's publisher talked her into changing the ending of her very first book, The Mysterious Affair at Styles, a move that almost certainly changed the fortunes of not only her career but the future of the whole crime writing genre. For the very first time, this book prints Agatha's original ending, painstakingly transcribed from her notebooks.

Every decade saw Agatha Christie's success grow to new heights. The emergence of the world-famous Collins Crime Club in 1930 brought with it the very first Miss Marple mystery, the austerity of the 1940s had Agatha Christie preparing to kill off Hercule Poirot, and the 1950s saw her experiment increasingly with formats influenced by more modern thrillers. Focusing on the detail of more than 20 Christie novels to illustrate this, John Curran shows the evolution of Agatha's writing through the decades, including the influence of the swinging sixties and seventies, concluding the book with a look at Agatha's last notebook, using his Christie knowledge to speculate about what she had in mind based on her brief notes for an unwritten final book.

Also includes a number of short stories from the archives reproduced in full, including the unpublished The Man Who Knew, How I Created Hercule Poirot, and an early draft for a Miss Marple story, The Case of the Caretaker's Wife.

'Many of Curran's discoveries will shape how Christie is read in future... This book is fascinating.' INDEPENDENT ON SUNDAY

`Agatha Christie's notebooks have had to wait for the meticulous attention, dedication and prodigious knowledge of John Curran to achieve publication.' THE TIMES

`This book is the story of a love affair between Curran and the notebooks, revealing above all how hard Christie worked.' INDEPENDENT

John Curran, a lifelong Christie fan, lives in Dublin. For many years he edited the official Agatha Christie Newsletter and acted as consultant to the National Trust during the restoration of Greenway House, Dame Agatha's Devon home. John has been working with her grandson, Mathew Prichard, to establish the Agatha Christie Archive, and is currently writing a doctoral thesis on Agatha Christie at Trinity College, Dublin.

GOR005354987
Agatha Christie's Murder in the Making: Stories and Secrets from Her Archive - includes an unseen Miss Marple Story by John Curran
John Curran
Used - Very Good
Paperback
HarperCollins Publishers
2012-08-30
496
0007396783
9780007396788
N/A
Book picture is for illustrative purposes only, actual binding, cover or edition may vary.
This is a used book - there is no escaping the fact it has been read by someone else and it will show signs of wear and previous use. Overall we expect it to be in very good condition, but if you are not entirely satisfied please get in touch with us.