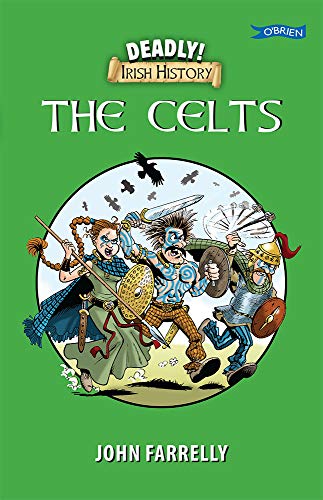 The Celts arrived in Ireland around 700BCE and dominated the bronze and iron ages. Even after Christianity, Irish Celts retained much of their unique culture. Accessible, anarchic and crammed to the rafters with cartoons and wacky illustrations, this book is as deadly as Irish history gets!

The DEADLY! Celts came to Ireland from Europe over 2,500 years ago!

But were they more than just bold, bragging bullies?

Find out in this DEADLY! Irish History.

a substantial read, offering a skilful mixture of facts, terrible jokes and activities, plus a few full pages of comics ... With sections on the origins, the mythology and the everyday life of the Celts, and with a specific nod towards their impact on modern-day Irish culture, these are perfect books for inquisitive kids and may well serve as an impetus towards an interest in History, doing the same job that Look and Learn, World of Wonder and Treasure did for kids in the past ... John Farrelly has produced an excellent second entry into this series, demonstrating his skill with both words and pictures. For children with an interest in History, this would be a perfect gift, for others it may well spark that interest. In the hands of John Farrelly, History is not simply a list of dates to be remembered, it is much, much more than that. We can only hope that there is more to come

Taking many steps further back through Irish history, John Farrelly takes a witty look at the Fianna, Imbolc, chariots, and warrior men and women in The Celts, the second title in his Deadly Irish History series. A caricature artist from Co Down, Farrelly's approach is fresh, fun, fast-moving, and enlivened by his cartoon illustrations. Such levity does not, however, diminish the book's factual content, and he prefaces his lighthearted look at Celtic society, religion, laws, and wars with an explanation of its sources. The research of archaeologists and historians; contemporary accounts of the Greeks and Romans, which he warns are "likely to be a bit biased"; and the myths and sagas told by the Celts "around the fires of their roundhouses" and written down centuries later by Christian scribes - these all make up the colourful tapestry of information about a people living in Ireland from around 700 BCE to the arrival of Christianity in the early 5th Century. Farrelly brings it all home to 21st Century children with his deadly guide to cattle-raiding (start by insulting your rival, saying "my sword will give your belly a red smile"); insights into the equity of the Brehon laws; and even crafty ideas for making your own roundhouse - well, you never know, it might come in handy one day

Farrelly's writing and pen-and-ink drawings never miss a beat in this well-informed, witty and irreverent account of the Celts. Its swiftly paced multi-format approach sprinkles the narrative with comic strips, guess-the-answer sessions, roll-the-dice-to-see-which character-you-are games; presents a Celtic fashion show complete with commentary; and shows you how to make your own games board or roundhouse. Its variety of forms means it engages with a variety of learning styles and it never once talks down to its readers. Its companionable wittiness sets it well beyond its English counterparts. Great fun!

History for all the family ... a brilliant book ... an easy way of absorbing lots of historical facts

Inspired and insightful, and filled with down 'n' dirty details about the nomadic tribes that settled along the Emerald Isle's stunning west coast, the slender tome includes sections on storytelling, art and culture, architecture, weaponry, law, religion, food, and more. Presented with bullet points and animated illustrations, the series debut is designed to engage easily distracted audiences (i.e.: young readers). A companion book by the same author, titled The Vikings, is equally entertaining and educational

Stocking filler...accessible, anarchic and crammed with cartoons and wacky illustrations, this book is as deadly as Irish history gets!

The second entry in the series Deadly! Irish History by the talented and brilliant author and illustrator, John Farrelly. We are brought on an action-packed adventure back in time to when the Celts first arrived in Ireland, 2,500 years ago. The author has an appealing style for young children. He writes in a witty, quirky way and the story is full of amazing illustrations. We are kept fully involved with the numerous art and craft ideas, quizzes, comic strips and activities. This multi format style to the story is sure to keep you and your inquisitive pupils highly entertained while making it an easy way to grasp lots of historical facts! It is most suitable for the senior classes. It will be a welcome addition to your resources for the 'Early peoples and ancient societies' strand in the history curriculum. As a history lover this is a much-anticipated series. It is well informed and insightful, and I would highly recommend this new series of books to any fellow teacher or parent. We can only hope that there is more to come!

John Farrelly was born and raised in a village just outside Newry, Co. Down. After dropping out of art college because all he wanted to do was write stories and draw pictures, he became a freelance caricature artist. He always did a full day's work - he just spread it over the whole week. Finally, after a three-day siege, where no one was injured and all hostages were released, The O'Brien Press let him write stories and draw pictures.

NGR9781788491303
9781788491303
1788491300
Deadly Irish History - The Celts by John Farrelly
John Farrelly
Deadly Irish History
New
Paperback
O'Brien Press Ltd
2020-09-14
144
N/A
Book picture is for illustrative purposes only, actual binding, cover or edition may vary.
This is a new book - be the first to read this copy. With untouched pages and a perfect binding, your brand new copy is ready to be opened for the first time
Trustpilot