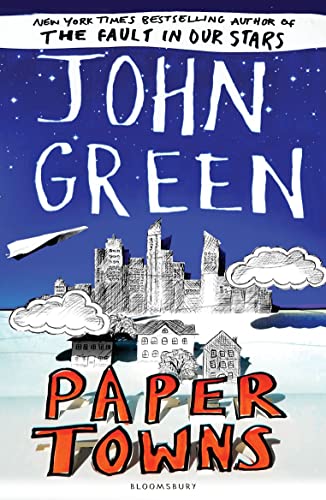 From the bestselling author of The Fault in our Stars and Looking for Alaska, soon to be a major TV series Quentin Jacobsen has always loved Margo Roth Spiegelman, for Margo (and her adventures) are the stuff of legend at their high school. So when she one day climbs through his window and summons him on an all-night road trip of revenge he cannot help but follow. But the next day Margo doesn't come to school and a week later she is still missing. Q soon learns that there are clues in her disappearance . . . and they are for him. But as he gets deeper into the mystery - culminating in another awesome road trip across America - he becomes less sure of who and what he is looking for. Masterfully written by John Green, this is a thoughtful, insightful and hilarious coming-of-age story.

Imagine a hybrid of Scooby Doo and The Catcher in the Rye and you get a little of this novel's flavour * The Financial Times *
Green's prose is astounding - from hilarious, hyperintellectual trash talk and shtick, to complex philosophizing, to devastating observation and truths. He nails it - exactly how a thing feels, looks, affects - page after page * School Library Journal *
Genuine - and genuinely funny - dialogue, a satisfyingly tangled but not unbelievable mystery and delightful secondary characters * Kirkus Reviews *

John Green is the New York Times bestselling author of Looking for Alaska, An Abundance of Katherines, Paper Towns, and The Fault in Our Stars. He is also the co-author, with David Levithan, of Will Grayson, Will Grayson. He was 2006 recipient of the Michael L. Printz Award, a 2009 Edgar Award winner and has twice been a finalist for the Los Angeles Times Book Prize. Green's books have been published in more than a dozen languages.

GOR005426739
Paper Towns by John Green
John Green
Used - Very Good
Paperback
Bloomsbury Publishing PLC
2013-12-19
320
140884818X
9781408848180
N/A
Book picture is for illustrative purposes only, actual binding, cover or edition may vary.
This is a used book - there is no escaping the fact it has been read by someone else and it will show signs of wear and previous use. Overall we expect it to be in very good condition, but if you are not entirely satisfied please get in touch with us.