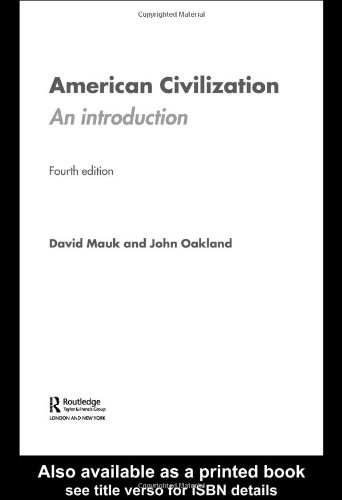 In Stock
£4.99
Looking at the religious, political, social and artistic significance of the Imperial tombs of the Tang Dynasty (618-907 AD), this is a landmark book.
Very Good
Only 1 left

Thoroughly revised, this fourth edition of a hugely successful text provides students of American studies with the perfect background and introductory information on contemporary American life.

This fourth edition covers all the central dimensions of American society from geography and the environment, government and politics, to religion, education, media and the arts.

With new illustrations and case studies, this edition of American Civilization also examines the second Gulf War, the War on Terror and the 2004 presidential election.

List of Plates. List of Figures. List of Tables. Preface and Acknowledgements. Chronology of Significant Dates in American History 1. The American Context 2. The Country 3. The People: Settlement and Immigration 4. The People: Women and Minorities 5. Political Institutions: The Federal Government 6. Political Institutions: Local Government 7. Foreign Policy 8. The Legal System 9. The Economy 10. Social Services 11. Education 12. The Media 13. Religion 14. The Arts, Sports and Leisure. Further Reading. Websites. Appendix: Declaration of Independence in Congress, 4th July 1776. The Consititution of the United States of America and Amendments. Index

GOR002821110
American Civilization: An Introduction by John Oakland
John Oakland
Used - Very Good
Paperback
Taylor & Francis Ltd
2005-06-22
192
0415358310
9780415358316
N/A
Book picture is for illustrative purposes only, actual binding, cover or edition may vary.
This is a used book - there is no escaping the fact it has been read by someone else and it will show signs of wear and previous use. Overall we expect it to be in very good condition, but if you are not entirely satisfied please get in touch with us.