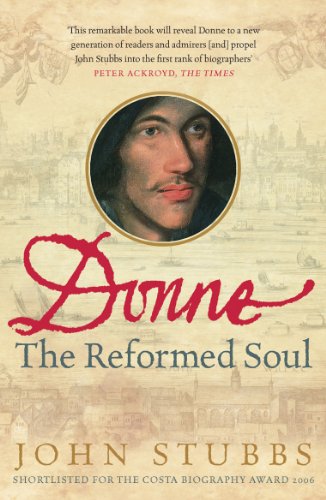 In Stock
£6.49
From the raucous streets of late sixteenth-century London to the personal and political intrigues of Donne's family and public life, from the horrors of the Reformation to the delight of Donne's poetry, this book offers a biography of an extraordinary man, as well as a compelling portrait of England at a time of bewildering transformation.
Very Good
7 in stock

John Stubbs's Donne: the Reformed Soul brings one of Britain's most famous poets - and famous periods in history - to life.

John Donne's life story is inextricably tied up with the fabric of a society in the throes of religious persecution. His family had long been subject to the terror inflicted upon Catholics under the reign of Elizabeth I, and while his brother languished in prison, and his mother and uncles fled to exile in Europe, Donne was consumed by the question of his own faith and by trying to figure out what it is that connects human beings - and keeps them apart.

In his biography of Donne, John Stubbs chronicles not only a long and bitter sectarian conflict, but also the love story of a young couple who broke the rules of their society, and paid the ultimate price.
From the raucous streets of late sixteenth-century London to the personal and political intrigues of Donne's family and public life, from the horrors of the Reformation to the delight of Donne's poetry, John Stubbs' book is a vivid, dazzling biography of an extraordinary man, as well as a compelling portrait of England at a time of bewildering transformation.

'Impressive . . . Fluent, assured and on fire with ideas and enthusiasm, excels at providing Donne with a living context'Miranda Seymour, Sunday Times

John Stubbs was born in 1977 and studied English at Oxford and Renaissance Literature at Cambridge where he completed a doctorate in 2005. Donne: The Reformed Soul was published in 2006 and won the Glen Dimplex Irish Writers' Centre New Writer of the Year and a Royal Society of Literature Jerwood Award for non-fiction. It was shortlisted for the Costa Biography Award and longlisted for the Guardian First Book Award.

GOR001155195
John Donne: The Reformed Soul by John Stubbs
John Stubbs
Used - Very Good
Paperback
Penguin Books Ltd
2007-06-07
592
0141017171
9780141017174
N/A
Book picture is for illustrative purposes only, actual binding, cover or edition may vary.
This is a used book - there is no escaping the fact it has been read by someone else and it will show signs of wear and previous use. Overall we expect it to be in very good condition, but if you are not entirely satisfied please get in touch with us.