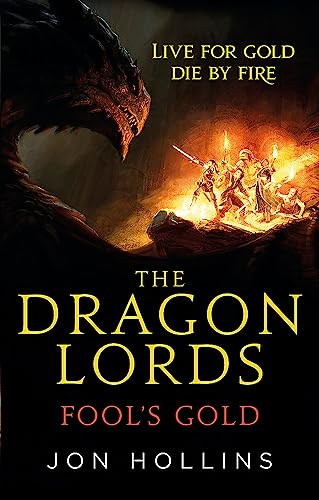 Used Price
£5.19
New RRP £8.99
Free Shipping in the UK
Epic fantasy with an irresistible hook: a ragtag group of adventurers plan a heist to steal a dragon's gold . . . and accidentally start a revolution. If you like the fantasy adventure of Kings of the Wyld or the wisecracking misfits of Guardians of the Galaxy, you'll love The Dragon Lords
Reviews:
Trustpilot
Very Good

'Jon Hollins is a one-of-a-kind storyteller, a master of epic fun and nonstop action' Nicholas Eames, author of Kings of the Wyld

"YOU'RE NOT PROPOSING WE STEAL FROM A DRAGON?"
It's not easy to live in a world ruled by dragons. The taxes are high and their control is complete. But for one group of bold adventurers, it's time to band together and steal back some of that wealth.
No one ever said they were smart.

Ocean's Eleven meets The Hobbit - Jon Hollins' debut combines non-stop action, death-defying adventure and a never-before-assembled cast of wisecracking misfits. It is a worthy addition to every fantasy lover's horde.

So freaking hilarious . . . fast paced, hard to put down and incredibly entertaining with some truly memorable characters * Reality's a Bore *
Unlike other books which contain a rag-tag gaggle of wacky adventure types, this book is actually good. And I mean, really really good * Tiny Reviews *
Ideal for fans of humorous capers and heist stories - such as Ocean's Eleven, Scott Lynch's Gentleman Bastard Sequence series and Lois McMaster Bujold's Vorkosigan Saga * Booklist *
Hollins's seat-of-the-pants fantasy comedy snowballs wildly into a glorious disaster of fire, magic, multiple threats to people's intestines, and fun-for the reader, if not the characters . . . a dragon's hoard for any fan of comic fantasy * Publishers Weekly *
As a stand-alone novel, it's extremely satisfying; as the beginning of a proposed series, it promises excitement and thrills for years to come. Highly recommended * FantasyLiterature.com *
Humor, action, snappy dialogue, and creative solutions to unusual problems . . . in this quirky tale, it's the infighting and the unforeseen circumstances that makes things so entertaining * Bibliosanctum *

Jon Hollins is a pseudonym.