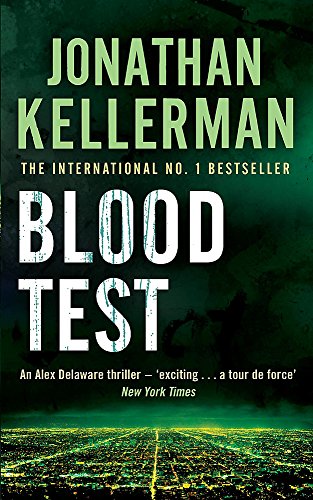 Alex Delaware is faced with a family being torn apart by dark secrets in this terrifying and gripping thriller from Jonathan Kellerman, the master of psychological suspense

Families can be pressure cookers of secrets and tensions, as psychologist Alex Delaware knows all too well. When the lid blows, violence is the result in BLOOD TEST, a taut thriller from New York Times No. 1 bestseller Jonathan Kellerman, author of KILLER, MOTIVE and BREAKDOWN. 'A tour de force' (New York Times) perfect for fans of David Baldacci and Harlan Coben.

Doctors believe that they can successfully treat five-year-old cancer patient, Woody Swope. But Woody's parents, members of a cult called 'The Touchers', are not only refusing the treatment, they're also threatening to remove him from the hospital.

Psychologist Alex Delaware, is called in to talk the parents round. But before he can, the Swopes are gone and so is Woody. All that remains is a savagely ransacked and bloodied motel room, their teenage daughter, Nona, and an increasingly sinister case to solve.

'Exciting...a tour de force' * New York Times *
Jonathan Kellerman is the No. 1 international bestselling author of more than three dozen bestselling crime novels, including the Alex Delaware series, THE BUTCHER'S THEATRE, BILLY STRAIGHT, THE CONSPIRACY CLUB, TWISTED and TRUE DETECTIVES. With his wife, bestselling novelist Faye Kellerman, he co-authored DOUBLE HOMICIDE and CAPITAL CRIMES. With his son, bestselling novelist Jesse Kellerman, he co-authored THE GOLEM OF HOLLYWOOD and THE GOLEM OF PARIS. He is also the author of two children's books and numerous non-fiction works. He has won the Goldwyn, Edgar and Anthony Awards and has been nominated for a Shamus Award. Jonathan and Faye Kellerman live in California, New Mexico and New York.
GOR000811711
9780755342778
0755342771
Blood Test (Alex Delaware series, Book 2): A spellbinding psychological crime novel by Jonathan Kellerman
Jonathan Kellerman
Alex Delaware
Used - Very Good
Paperback
Headline Publishing Group
2008-03-06
352
N/A
Book picture is for illustrative purposes only, actual binding, cover or edition may vary.
This is a used book - there is no escaping the fact it has been read by someone else and it will show signs of wear and previous use. Overall we expect it to be in very good condition, but if you are not entirely satisfied please get in touch with us
Trustpilot