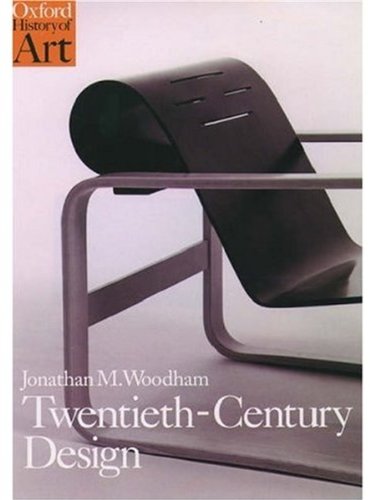 Out of Stock
A look at the wider issues of design and industrial culture throughout Europe, Scandinavia, North America, and the Far East. The book explores the way in which 20th-century designs such as the Coca-Cola bottle have affected our culture more than those considered true classics
Very Good
Only 0 left

The most famous designs of the 20th century are not those in museums, but in the marketplace. The Coca-Cola bottle and the MacDonald's logo are known all over the world, and designs like the modernistic "Frankfurt Kitchen" of 1926, or the 1954 streamlined and tail-finned Oldsmobile, or "Blow", the inflatable chair ubiquitous in the late 60s tell us more about our culture than a narrowly-defined canon of classics. Drawing on scholarship not only in design history, but also in social anthropology and women's history, Jonathan Woodham takes a look at the wider issues of design and industrial culture throughout Europe, Scandinavia, North America, and the Far East. He explores themes such as national identity, the "Americanization" of ideology and business methods, the rise of the multi-nationals, Pop and Postmodernism, as well as contemporary ideas of nostalgia and heritage, and sets the proliferation of everyday design against the writing of critics as different as Nikolaus Pevsner, the champion of Modernism, and Vance Packard, author of "The Hidden Persuaders". In the history which emerges, design is clearly seen for what it is: the powerful and complex expression of aesthetic, social, economic, political, and technological forces.

Jonathan M. Woodham is Director of the Design History Research Centre, University of Brighton, and Review Editor of Journal of Design History. His publications Twentieth-Century Ornament: Decoration from 1900 to the Present, 1990).

GOR001423270
Twentieth-century Design by Jonathan M. Woodham
Jonathan M. Woodham
Oxford History of Art
Used - Very Good
Hardback
Oxford University Press
1997-05-31
288
0192842471
9780192842473
N/A
Book picture is for illustrative purposes only, actual binding, cover or edition may vary.
This is a used book - there is no escaping the fact it has been read by someone else and it will show signs of wear and previous use. Overall we expect it to be in very good condition, but if you are not entirely satisfied please get in touch with us.