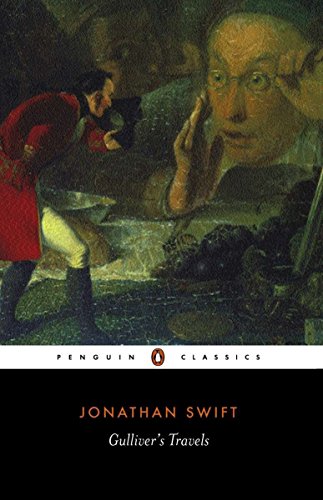 New Price
£5.99
Free Shipping in the UK
Describes the four voyages of Lemuel Gulliver, a ship's surgeon. This text, based on the first edition of 1726, reproduces all the original illustrations and includes an introduction, which discusses the ways "Gulliver's Travels" has been interpreted since its first publication.
New£5.99

A wickedly clever satire uses comic inversions to offer telling insights into the nature of man and society, the Penguin Classics edition of Jonathan Swift's Gulliver's Travels is edited with an introduction and notes by Robert Demaria, Jr.

Gulliver's Travels describes the four voyages of Lemuel Gulliver, a ship's surgeon. In Lilliput he discovers a world in miniature; towering over the people and their city, he is able to view their society from the viewpoint of a god. However, in Brobdingnag, a land of giants, tiny Gulliver himself comes under observation, exhibited as a curiosity at markets and fairs. In Laputa, a flying island, he encounters a society of speculators and projectors who have lost all grip on everyday reality; while they plan and calculate, their country lies in ruins. Gulliver's final voyage takes him to the land of the Houyhnhnms, gentle horses whom he quickly comes to admire - in contrast to the Yahoos, filthy bestial creatures who bear a disturbing resemblance to humans.

This text, based on the first edition of 1726, reproduces all the original illustrations and includes an introduction by Robert Demaria, Jr, which discusses the ways Gulliver's Travels has been interpreted since its first publication.

Jonathan Swift (1667-1745) was born in Dublin. Sent to Kilkenny Grammar School when he was six, Swift later attended Trinity College, Dublin, where he received his BA degree in 1686. He is considered the foremost prose satirist in the English language, which stemmed from his criticism of Britain's repressive colonial policies in Ireland. Among Swift's best known works is his ironic masterpiece, 'A Modest Proposal' (1729), and his novel, Gulliver's Travels (1726).

If you enjoyed Gulliver's Travels, you might like H.G. Wells's The Time Machine, also available in Penguin Classics.

'A masterwork of irony ... that contains both a dark and bitter meaning and a joyous, extraordinary creativity of imagination'
Malcolm Bradbury

Anglo-Irish poet, satirist and clergyman, Jonathan Swift (1667-1745), was born in Dublin to English parents. He embarked on a career as diplomatic secretary and became increasingly involved in politics. He published many satirical works of verse and prose, including 'A Tale of a Tub', 'A Modest Proposal', and 'Gulliver's Travels'.
Robert DeMaria, Jr. is Henry Noble MacCracken Professor of English at Vassar College, New York. He has published widely on 17th and 18th century literature.