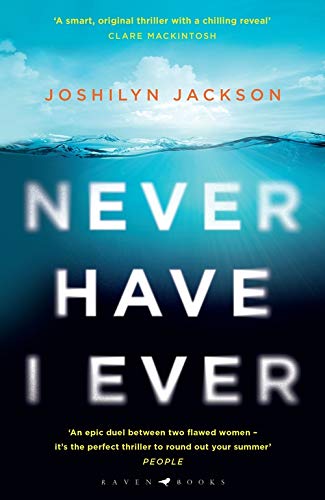 Never Have I Ever
by Joshilyn Jackson

Never Have I Ever Summary

Never Have I Ever: 'One hell of a thriller' Heat by Joshilyn Jackson

Never Have I Ever... done something I shouldn't. 'Wonderful - suspense and surprises, real characters and a scary, ominous backbeat' LEE CHILD 'I couldn't turn the pages fast enough' CLARE MACKINTOSH It starts as a game at a book group one night. Never Have I Ever... done something I shouldn't. But Amy Whey has done something she shouldn't. And Roux, the glamorous newcomer to Amy's suburban neighbourhood, knows exactly what that is. Roux promises she will go away - if Amy plays by her rules. But Amy isn't prepared to lose everything. She's going to fight back, and in this escalating game of cat and mouse, there can be only one winner. 'Once I started, I couldn't put this one down' CHRISTINA DALCHER 'Wow - what a book! I devoured it in one day' RACHEL ABBOTT

Customer Reviews - Never Have I Ever

Never Have I Ever Reviews

Brilliant... horribly credible, and Jackson's dialogue and scene-painting are impeccable as each chapter addictively advances the battle of wits * Sunday Times, Thriller of the Month *
Wonderful - suspense and surprises, real characters and a scary, ominous backbeat. This feels like the book Jackson was born to write -- Lee Child
A smart, original thriller with real, compelling characters and a chilling reveal. I couldn't turn the pages fast enough -- Clare Mackintosh
Jackson writes the kind of book that will set even the most blameless on edge, leaving us to wonder who might know our imperfect histories. Once I started, I couldn't put this one down -- Christina Dalcher, author of Vox
Full of masterful suspense, this is one hell of a thriller * Heat *
Our old friend, the psychological thriller, absolutely immaculately done, to be read in one breathless sitting -- India Knight * Sunday Times Magazine *
A heart-pounding tale of cat and mouse with twists you won't see coming. Just when you think you couldn't be more shocked, Jackson delivers a mind-blowing ending. Riveting! -- Liv Constantine
A riveting read that will get you wondering who you can trust -- Nina Pottell * Prima Magazine *
This book will make you gasp with shock. A summer must-read! * Woman *
Jackson raises the stakes again and again in this skilfully plotted novel -- Laura Wilson * Guardian *
Wow - what a book! I devoured it in one day, and it's a book that will stay with me for a long time. It is such a compelling story, but for me even more important than the brilliant and original plot was the strength and clarity of the characters -- Rachel Abbott
The more Roux and Amy became obsessed with each other, the more obsessed I became with the book ... By the time of the explosive, entirely unexpected climax, I was clinging to the edge of my seat -- Sara Gruen
Nail-biting suspense ... Jackson builds on her talent for creating imperfect, capable and multi-layered characters to write smart suspense, driven by the intelligence and determination of the instigator and her prey * Booklist *
One of those thrillers with such a distinct style and such rich writing you simultaneously want to turn the pages but also just want to slow down and soak it up. Amazing -- Amy Lloyd
Dark, twisty and brilliantly plotted. Never Have I Ever is a compelling game of cat and mouse. Couldn't put it down -- Alice Clark-Platts
Well-developed, memorable characters and an action-packed plot * Publisher's Weekly *
Chock-full of dramatic reveals and twisty turns... Be warned: It's a stay-up-all-night kind of book. Compulsively readable * Kirkus Reviews *
[Jackson's] prowess at writing affecting, character-driven fiction is on full display, and readers will devour the twisty, consuming story * Library Journal *
A tale of moral suspense in addition to a psychological thriller. Its several plot twists are surprising and effective ... Many books claim to be the perfect beach read. This one doesn't, but it certainly fits the bill * Wall Street Journal *

Joshilyn Jackson lives in Decatur, Georgia with her husband and their two children. For the past six years she has taught creative writing and literature courses for Georgia's maximum security facility for women. Through their education-in-prison and re-entry programmes, Reforming Arts fosters the development of critical and creative thinking skills, encouraging students to build liveable lives. She's also an award winning audiobook narrator, performing most of her own work as well as other authors including Lydia Netzer and Marybeth Mayhew Whalen.

GOR010554281
Never Have I Ever: 'One hell of a thriller' Heat by Joshilyn Jackson
Joshilyn Jackson
Used - Very Good
Paperback
Bloomsbury Publishing PLC
2020-05-14
352
1526611600
9781526611604
N/A
Book picture is for illustrative purposes only, actual binding, cover or edition may vary.
This is a used book - there is no escaping the fact it has been read by someone else and it will show signs of wear and previous use. Overall we expect it to be in very good condition, but if you are not entirely satisfied please get in touch with us.