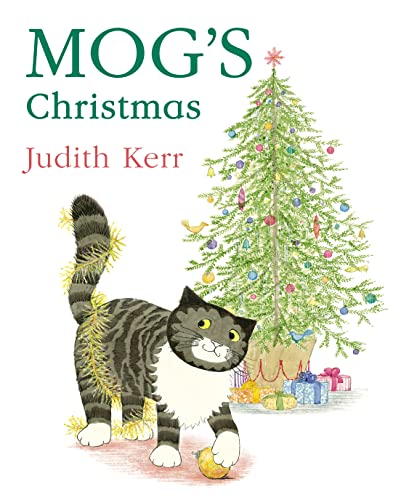 The house is full of strange bustling noises and peculiar smells. Everyone is busy hanging holly and blowing up balloons, and where is that tree going?

Disconcerted by all the unusual activities, Mog escapes to the roof, and there she stays...until, unexpectedly, she returns with a bump!

Praise for Mog the Forgetful Cat:
`Grandparents are likely to get as much fun out of seeing it again as the new generation of fans just learning to read!' Choice Magazine

`A lovely book for all Mog-fanciers' The Observer

Praise for Goodbye Mog:
`Kerr's warmth, humour and honesty make this an engaging introduction to a difficult topic' Financial Times

`A supremely sensitive story' The Times

`The best, most consoling book for children on the subject of bereavement...a joy to read' The Independent on Sunday

GOR010475768
Mog's Christmas by Judith Kerr
Judith Kerr
Used - Like New
Paperback
HarperCollins Publishers
2004-11-01
32
0007171358
9780007171354
N/A
Book picture is for illustrative purposes only, actual binding, cover or edition may vary.
The book has been read, but looks new. The book cover has no visible wear, and the dust jacket is included if applicable. No missing or damaged pages, no tears, possible very minimal creasing, no underlining or highlighting of text, and no writing in the margins.