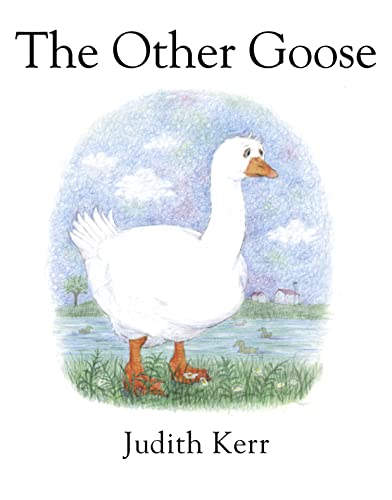 The Other Goose
by Judith Kerr

Once there was a goose called Katerina...

Katerina was the only goose on her pond, and this made her very sad and rather lonely.

The Other Goose Summary

The Other Goose by Judith Kerr

Once there was a goose called Katerina...

Katerina was the only goose on her pond, and this made her very sad and rather lonely.

Sometimes she thought she could see another goose in the side of the bank manager, Mr Buswell's shiny car. She would stare and stare at it, hoping that one day that goose would come out and join her on the pond.

"Just look at that silly bird!" said Mr Buswell. But everyone liked Katerina no matter what he said.

One dark Christmas night when everyone was at a party in the square, Katerina woke alone. She went to see the goose in the shiny car, but the goose had gone - had he come out at last? And who was that man with the goose-sized bag coming out of the bank? Was he carrying a goose-sized companion for Katerina? When Katerina stops him to find out, she becomes the local heroine and gains a wonderful reward - life on her pond will never be the same again...

GOR000877102
The Other Goose by Judith Kerr
Judith Kerr
Used - Very Good
Paperback
HarperCollins Publishers
2002-10-07
32
0007127359
9780007127351
N/A
Book picture is for illustrative purposes only, actual binding, cover or edition may vary.
This is a used book - there is no escaping the fact it has been read by someone else and it will show signs of wear and previous use. Overall we expect it to be in very good condition, but if you are not entirely satisfied please get in touch with us.