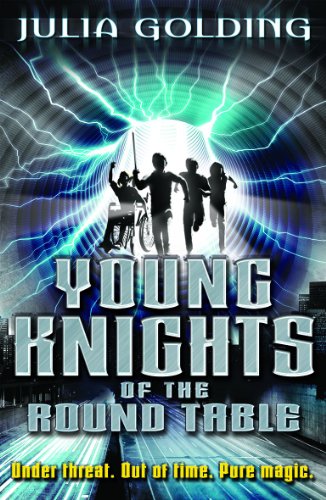 In Stock
£3.99
Snatched from their cradles by faerie thieves, Rick, Roxy, and Tiago have been brainwashed to hate humans and trained in the art of magical warfare. When Avalon is attacked by an unseen enemy, the Fey send them to Earth to investigate a rumour that the Round Table is being re-formed. But they soon discover that the truth is much, much worse . . .
Very Good
Only 2 left

HUMANS ARE THE ENEMY! That's what Rick's been taught to believe by the Fey Folk who stole him. Taken to the magical realm of Avalon, he's been trained, alongside other kids like him, into an elite force of warriors. When rumours start that a new generation of knights are re-forming the Round Table to attack Avalon, the Fey entrust Rick with a mission: go to Earth, find the knights, and stop them. Simple, right? Well, not exactly . . . No training could prepare him for the shock of being a modern teenager. And when he discovers that the Fey have been lying to him, Rick has to ask: if humans aren't the enemy-who is?

"...readers will be rewarded with an excellent story...this is good writing from a quality author." * Books for Keeps *
"...A pacy plot with deft characterisation makes this an exciting read for fantasy lovers..." * The School Librarian *
"An exciting time-travel adventure for readers aged nine plus, drawing upon King Arthur legends, it swaps between the fairy realm of Avalon and modern day Oxford." * Leon Burakowski, Chronicle Series West Midlands *

Julia Golding grew up on the edge of Epping Forest. After reading English at Cambridge, she joined the Foreign Office and served in Poland. On leaving the Foreign Office, she joined Oxfam as a lobbyist on conflict issues, campaigning at the United Nations and with governments to lessen the impact of conflict on civilians living in war zones. She now writes full-time, and lives in Oxford with her husband and three children.

GOR004705382
Young Knights 1: Young Knights of the Round Table by Julia Golding
Julia Golding
Used - Very Good
Paperback
Oxford University Press
2013-04-16
368
0192732226
9780192732224
N/A
Book picture is for illustrative purposes only, actual binding, cover or edition may vary.
This is a used book - there is no escaping the fact it has been read by someone else and it will show signs of wear and previous use. Overall we expect it to be in very good condition, but if you are not entirely satisfied please get in touch with us.