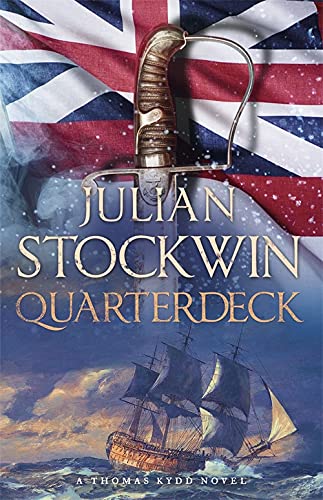 In Stock
£5.49
A dramatic new cover look for the bestselling adventures of Kydd in the Great Age of Sail
Very Good Good Well Read
11 in stock

Thomas Kydd was promoted to acting lieutenant at the bloody Battle of Camperdown in October 1797. Now, he must sit an examination to confirm his rank - or face an inglorious return before the mast.

But this is only the first of many obstacles for a man who was pressed into the King's Service and discovered a calling for the sea. Kydd is from humble origins, yet he attains the lofty heights of the quarterdeck as an officer in His Majesty's Navy. If he is to avoid spending the rest of his career as a tarpaulin officer, he must also become a gentleman.

Kydd and his enigmatic friend Nicholas Renzi set sail in HMS Tenacious for the North American station. Aboard the old 64-gun ship, Kydd comes to doubt he will ever match up to the high-born gentlemen officers.

What readers are saying about QUARTERDECK

'This book is of the highest standard' - 5 stars

'The vantage point of the common sailor gives the nautical novel a fresh twist. In Stockwin's hands the sea story will continue to entrance readers across the world.' - Guardian
'I was soon turning over the pages almost indecently fast ... Roll on, the promised adventures of Kydd and Renzi.' - Independent
'Stockwin paints a vivid picture of life aboard the mighty ship-of-the-line... the harsh naval discipline, the rancid food, and the skill of the common sailor are all skilfully evoked.' - Daily Express

GOR001165498
Quarterdeck: Thomas Kydd 5 by Julian Stockwin
Julian Stockwin
Used - Very Good
Paperback
Hodder & Stoughton General Division
2005-03-28
352
0340832193
9780340832196
N/A
Book picture is for illustrative purposes only, actual binding, cover or edition may vary.
This is a used book - there is no escaping the fact it has been read by someone else and it will show signs of wear and previous use. Overall we expect it to be in very good condition, but if you are not entirely satisfied please get in touch with us.