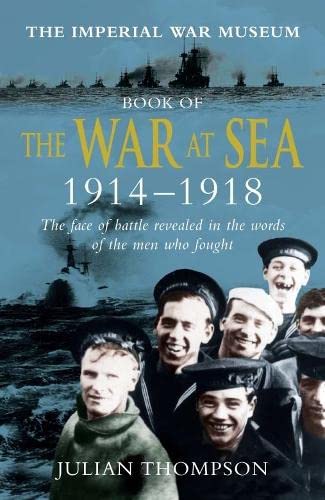 In Stock
£13.99
A vivid and compelling history of the Royal Navy during the First World War drawing on unique testimony from the archives of the Imperial War Museum
Good
Only 1 left

Based on gripping first-hand testimony from the archives of the Imperial War Museum, this book reveals what it was really like to serve in the Royal Navy during the First World War. It was a period of huge change - for the first time the British navy went into battle with untried weapon systems, dreadnoughts, submarines, aircraft and airships. Julian Thompson blends insightful narrative with never-before-published stories to show what these men faced and overcame.

Officers and men, from admirals down to the youngest sailors faced the same dangers, at sea in often terrible weather conditions, with the ever-present prospect of being blown to pieces, or choking to death trapped in a compartment or turret as they plunged to the bottom of the sea. In their own words they share their experiences, from from long patrols and pitched battles in the cold, rough water of the North Sea to the perils of warfare in the Dardanelles; from the cat-and-mouse search for Vice-Admiral Graf von Spee in the Pacific to the dangerous raids on Ostend and Zeebrugge. We see what it was like to spend weeks in the cramped, smelly submarines of the period, or to attack U-boats from unreliable airships.

After a distinguished career in the Royal Marines, General Julian Thompson is now visiting professor in the Dept of War Studies, Kings College. He is the author of nine other works of military history.

GOR001277682
Imperial War Museum Book of the War at Sea 1914-18 by Julian Thompson
Julian Thompson
Used - Good
Paperback
Pan Macmillan
2006-05-05
496
0330491725
9780330491723
N/A
Book picture is for illustrative purposes only, actual binding, cover or edition may vary.
This is a used book - there is no escaping the fact it has been read by someone else and it will show signs of wear and previous use. Overall we expect it to be in very good condition, but if you are not entirely satisfied please get in touch with us.