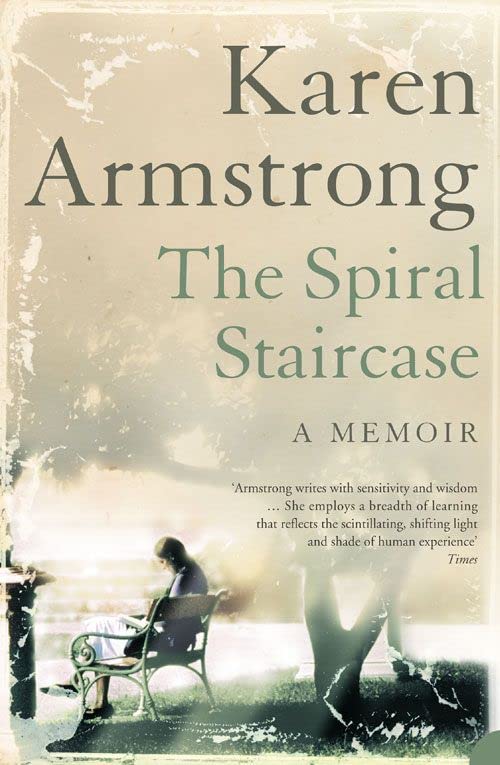 The Spiral Staircase
by Karen Armstrong

A raw, intensely personal memoir of spiritual exploration from one of the world's great commentators on religion.

The Spiral Staircase by Karen Armstrong

A raw, intensely personal memoir of spiritual exploration from one of the world's great commentators on religion.

After seven years in a convent, which she left, dismayed by its restrictions, an experience recounted in `Through the Narrow Gate', Karen Armstrong struggled to establish herself in a new way of life, and became entrapped in a downward spiral, haunted by despair, anorexia and suicidal feelings.

Despite her departure from the convent she remained within the Catholic Church until the God she believed in 'died on me', and she entered a `wild and Godless period of crazy parties and numerous lovers'. Her attempts to reach happiness and carve out a career failed repeatedly, in spectacular fashion. She began writing her bestseller `A History of God' in a spirit of scepticism, but through studying other religious traditions she found a very different kind of faith which drew from Christianity, Judaism and Islam and, eventually, spiritual and personal calm.

In her own words, her `story is a graphic illustration - almost an allegory - of a widespread dilemma. It is emblematic of a more general flight from institutional religion and a groping towards a form of faith that has not yet been fully articulated but which is nevertheless in the process of declaring itself'. Her lifelong inability to pray and to conform to traditional structures of worship is shared by the many who are leaving the established churches but who desire intensely a spiritual aspect to their lives.

`The Spiral Staircase' grapples with the issue of how we can be religious in the contemporary world, and the place and possibility of belief in the 21st-century.

`The book deserves many readers...Karen Armstrong must be a woman of iron to have survived, made a career and a life.' Hilary Mantel

`Admirably lucid...she gives a more exact and vivid account of the pleasures of writing than any I have seen.' Sunday Times

`Armstrong manages to put into words something that most of us cannot express.' New Statesman

Karen Armstrong spent seven years as a Roman Catholic nun and now teaches at the Leo Baeck College for the Study of Judaism and the Training of Rabbis and Teachers. A regular reviewer for the Sunday Times, her books include `A History of God', `Holy War', `The Gospel According to Women', `The Battle for God, Islam: A Short History' and `Through the Narrow Gate'. Her work has been translated into forty languages. She is the author of three television documentaries. In 1999 she was awarded the Muslim Public Affairs Council Media Award. Since September 11, 2001 she has been a frequent contributor to conferences, panels, newspapers and periodicals on both sides of the Atlantic on the subject of Islam and fundamentalism. She lives in London.

GOR001070730
The Spiral Staircase by Karen Armstrong
Karen Armstrong
Used - Very Good
Paperback
HarperCollins Publishers
2005-01-03
368
0007122292
9780007122295
N/A
Book picture is for illustrative purposes only, actual binding, cover or edition may vary.
This is a used book - there is no escaping the fact it has been read by someone else and it will show signs of wear and previous use. Overall we expect it to be in very good condition, but if you are not entirely satisfied please get in touch with us.