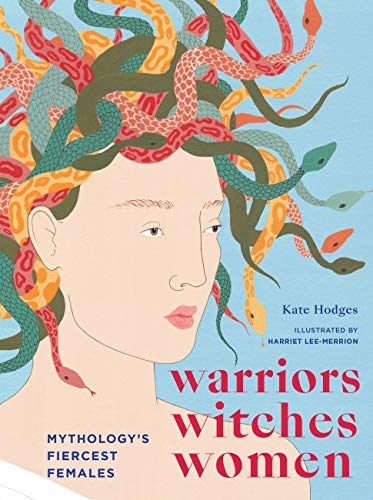 Out of Stock
£12.99
An inspiring new analysis of females from perennially popular myth and legend, as well as uncovering previously overlooked characters. This contemporary feminist approach speaks directly to the empowering rhetoric of recent women-focused publishing.
Very Good
Only 0 left

From feminist fairies to bloodsucking temptresses, half-human harpies and protective Vodou goddesses, these are women who go beyond long-haired, smiling stereotypes. Their stories are so powerful, so entrancing, that they have survived for millennia. Lovingly retold and updated, Kate Hodges places each heroine, rebel and provocateur fimly at the centre of their own narrative. Players include:

Find your tribe, fire your imagination and be empowered by this essential anthology of notorious, demonised and overlooked women.

With subjects ranging from Kali and Baba Yaga to La Llorona and Maman Brigitte, this is an appealing
overview of mythical women who have become mainstream icons. * Booklist | ALA *
From the famous Greek bringer of misfortune Medusa, to the Jewish demon Lilith and the Japanese supernatural beast Futakuchi-Onna, this collection of tales explores both the myths that saturate Western fame and the legends you've yet to hear about - but trust me, after you get to know them, these magical ladies are impossible to forget. * BookTrib *

Kate Hodges graduated from the University of Westminster with a BA in Print Journalism. She has over 20 years writing experience on magazines, having been a staffer on publications including The Face, Bizarre, Just Seventeen, Smash Hits and Sky, and written for many more, including The Guardian, Kerrang! and NME. She has also worked for Rapido TV and P For Production films. She is the author of three books on London.

Harriet Lee-Merrion is an award-winning illustrator based in Bristol, in the South West of England. Her work has been published worldwide and exhibited internationally in New York, London and Berlin. She has illustrated for numerous clients including The British Library, Conde Nast, the Guardian, the Washington Post and the New York Times.

GOR010717382
Warriors, Witches, Women: Mythology's Fiercest Females by Kate Hodges
Kate Hodges
Used - Very Good
Hardback
Aurum Press
2020-02-04
224
178131926X
9781781319260
N/A
Book picture is for illustrative purposes only, actual binding, cover or edition may vary.
This is a used book - there is no escaping the fact it has been read by someone else and it will show signs of wear and previous use. Overall we expect it to be in very good condition, but if you are not entirely satisfied please get in touch with us.