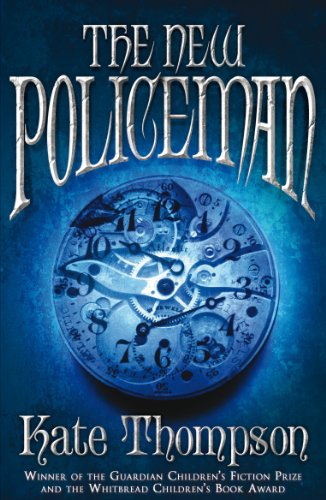 The New Policeman
by Kate Thompson

Out of Stock
Everyone in Kinvara is conscious that time is flying past, faster and faster - to such an extent that when JJ asks his mother what she would like as a birthday present she ask for more time.
Very Good
Only 0 left

The New Policeman by Kate Thompson

Everyone in Kinvara is conscious that time is flying past, faster and faster - to such an extent that when JJ asks his mother what she would like as a birthday present she ask for more time. JJ dismisses this as mere wishful thinking, an impossibility, for who know where the time goes? The Liddys have been musicians for generations and JJ is no exception but what he discovers is that a shadow from the past hangs over their family -did his great-grandfather murder the village priest? When he sets out to buy his mother time, he discovers the fate of a flute which will provide the key to both problems - it is the vital clue. He makes the transition to Tir na n'Og, the land of eternal youth, where the fairy people are also having a problem with time and it falls to his lot to locate the leak between the two parallel worlds. JJ finds where time goes! Music proves to be the touchstone for communication between the fairy and the human domains and the book is saturated with the lure of Irish music for JJ`s whole existence is built round the ceili and each chapter relates to a tune, printed out as a heading so that the reader can also become a performer. As for the New Policeman, Larry O'Dwyer, he is an enigmatic figure who has a significant bearing on the plot but whose identity is kept a superbly guarded secret to the very last surprising moment.

"If you buy nothing else for your children (or yourself) this summer, buy Kate Thompson's The New Policeman . . . Witty, entrancinly romantic and rooted in an ancient Celtic myth, this is a parable about not having enough time which hits hard" -- Christina Hardyment * Independent *
"A story full of surprises, magic and a delicately balanced internal logic" -- Julia Eccleshare * Guardian *
"Kate Thompson's work always surprises with its inventiveness and sheer quality of her writing . . . At times dark, daring and subversive, at times sheer fun . . . This book breaks new ground and should become a classic" * Inis *
"A masterful fantasy of the old school: long on story, short on whizzy gimmicks . . . Beautifully told and the characters draw you in" * Carousel *
"A distinctive and beautifully written book . . . An enthralling tale, both whimsical and deep, told with a dry laconic wit" * Books for Keeps *

Kate Thompson is one of the most exciting authors writing for young people today. A born storyteller, her work is highly original and she is thought provoking in her ideas. She has travelled widely in the USA and India and studied law in London. After living in County Clare, she moved to Kinvara in County Galway and there, she discovered her passion for playing the fiddle. She is now an accomplished player and also has a great interest in restoring instruments. Kate is the only author to win the Children's Books Ireland Bisto Book of the Year award four times - in 2002 for The Beguilers, in 2003 for The Alchemist's Apprentice, in 2004 for Annan Water and in 2006 for The New Policeman. The New Policeman also won the Guardian Children's Fiction Prize 2005, the Whitbread Book Award Children's category 2005, the Children's Book of the Year in the Irish Book Awards in March 2006 and has been longlisted for the Carnegie Medal. In 2008 Kate was again shortlisted for the Children's Books Ireland Bisto Award for her book, The Last of the High Kings, a beautiful and haunting story that delves deep into the magic of Irish myth and folklore.

GOR000477155
The New Policeman by Kate Thompson
Kate Thompson
The New Policeman Trilogy
Used - Very Good
Paperback
Random House Children's Publishers UK
2006-04-06
416
0099456273
9780099456278
Winner of Whitbread Book Awards: Children's Book Category 2005 Winner of Guardian Children's Fiction Prize 2005
Book picture is for illustrative purposes only, actual binding, cover or edition may vary.
This is a used book - there is no escaping the fact it has been read by someone else and it will show signs of wear and previous use. Overall we expect it to be in very good condition, but if you are not entirely satisfied please get in touch with us.