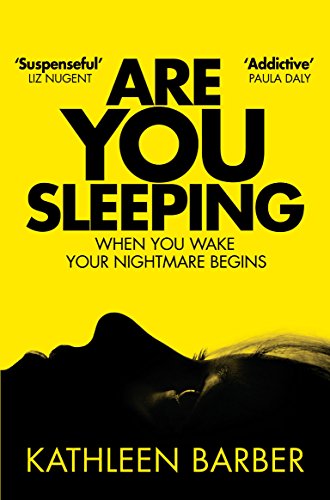 Are You Sleeping
by Kathleen Barber

Out of Stock
An addictive debut psychological thriller for fans of Serial, Disclaimer and Luckiest Girl Alive.
Like New
Only 0 left

Are You Sleeping Summary

Are You Sleeping by Kathleen Barber

'I couldn't turn the pages fast enough . . . a terrific debut' - Jenny Blackhurst, author of Before I Let You In.

The only thing more dangerous than a lie . . . is the truth.

When a family man is killed at point blank range in his home, it shakes a sleepy town to its core. The murder is a strange, horrifying crime but for the authorities it's an open-and-shut case.

Ten years on, the victim's daughter, Josie, has started afresh in New York - far from the tragic events that blew her family apart. No-one knows the truth about her previous life, not even her fiance.

Investigative journalist Poppy is convinced the wrong man is in jail for the murder and she's determined to prove it. What starts off as a true-crime podcast snowballs into a national phenomenon and everyone has an opinion on the case. Poppy's relentless pursuit of the truth threatens to expose old secrets. Josie realizes that her father's murder could have consequences more devastating than she had ever imagined.

Are You Sleeping is a gripping debut psychological thriller from Kathleen Barber for fans of Serial, Disclaimer and Luckiest Girl Alive. Oscar winner Octavia Spencer will be starring in the TV adaptation, produced by Reese Witherspoon.

Are You Sleeping Reviews

Are You Sleeping will more than likely keep you up all night as this most compelling suspenseful novel unfolds. A classic whodunit gets a very clever modern treatment that left this reader's heart racing right up to the last page. * Liz Nugent, author of Lying in Wait *
I couldn't turn the pages fast enough . . . a terrific debut * Jenny Blackhurst, author of Before I Let You In *
Tense, clever, addictive * Paula Daly, author of The Mistake I Made *
An astute debut . . . turning our obsession with true crime inside out * Stylist *

Kathleen Barber was raised in Galesburg, Illinois. She graduated from the University of Illinois and Northwestern University School of Law, and previously practiced bankruptcy law at large firms in Chicago and New York. Are You Sleeping is her debut novel. When she's not writing, Kathleen enjoys travelling the world with her husband.

GOR010509956
Are You Sleeping by Kathleen Barber
Kathleen Barber
Used - Like New
Paperback
Pan Macmillan
2017-12-27
384
1509843000
9781509843008
N/A
Book picture is for illustrative purposes only, actual binding, cover or edition may vary.
The book has been read, but looks new. The book cover has no visible wear, and the dust jacket is included if applicable. No missing or damaged pages, no tears, possible very minimal creasing, no underlining or highlighting of text, and no writing in the margins.