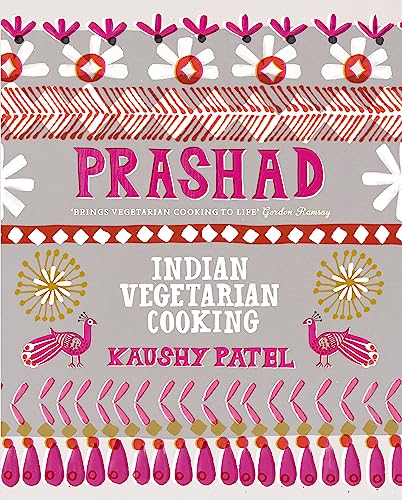 A vibrant and original vegetarian cookbook that brings authentic Indian cooking into your own kitchen. Vegetarian food will never taste the same again!

The Patels and Prashad, their small Indian restaurant in Bradford, were the surprise stars of Ramsay's Best Restaurant TV show in autumn 2010. Everyone who saw them fell in love with this inspirational family dedicated to serving delicious, original vegetarian food.

At the heart of the family is Kaushy, who learned to cook as a child growing up on her grandmother's farm in northern India. On moving to northern England in the 1960s, she brought her passion for fabulous flavours with her and has been perfecting and creating dishes ever since. Never happier than when feeding people, Kaushy took her son Bobby at his word when he suggested that she should share her cooking with the world - a launderette was converted first in to a deli and then a restaurant, and Prashad was born.

Now Kaushy shares her cooking secrets - you'll find more than 100 recipes, from simple snacks to sumptuous family dinners, to help you recreate the authentic Prashad experience at home. Whether it's cinnamon-spice chickpea curry, green banana satay, spicy sweetcorn or chaat - the king of street-side India - there's plenty here for everyone to savour and share.

Prashad - the smallest restaurant with the biggest heart * Gordon Ramsay *
The food is flawless ... absolutely phenomenal, I was blown away * Angela Hartnett *
TIMES TOP 40 COOKBOOKS OF THE YEAR: Prashad is the tiny Bradford outfit that was the surprise star of Ramsay's Best Restaurant in 2010, and this book brings together the Patel family recipes from the farm in northern India. From simple street food to sumptuous family feasts, the 100-plus dishes are tested through the generations and are refreshingly unusual. * The Times *
You know when Gordon Ramsay is praising a vegetarian restaurant, something must be different about the place. * Cook Vegetarian *
This is the perfect book for anybody who wants to learn how to make good authentic Gujarati food... the book includes interesting stories and explanations of the food. * The Vegetarian Magazine *
This book has a great range of recipes from simple sides to magnificent mains. * Alex Connoll, Cordon Vert Cookery School *
It was all deeply satisfying. * Aileen Reid, The Telegraph *
Kaushy shares the secrets of her tasty vegetarian cuisine with explanations clear enough for spice-rack novices but challenging enough for those with a bit more skill. * The Week *
An excellent introduction to the delights of Indian vegetarian cooking... A valuable addition to your kitchen bookshelf, whether you are a veggie or not. * Handmade Living Magazine *

Kaushy Patel uses the kitchen skills learned at her grandmother's knee in the Gujarat to transform traditional dishes with her own touches and create fresh, flavoursome food - whether cooking for friends and relations at home or for the lucky diners at Prashad, the Patel family's amazing vegetarian Indian restaurant.

The warmest and friendliest of chefs, Kaushy won over the Great British viewing public when the Patel family appeared on 2010's Ramsay's Best Restaurant, in which Prashad was the series runner-up. She added teaching to her talents in 2011 and gives highly sought-after lessons at Dean Clough's Cooking School, enabling Kaushy to share her passion for food with even more people.

GOR005249147
9781444734713
1444734717
Vegetarian Indian Cooking: Prashad by Kaushy Patel
Kaushy Patel
Used - Very Good
Hardback
Headline Publishing Group
2012-09-13
272
N/A
Book picture is for illustrative purposes only, actual binding, cover or edition may vary.
This is a used book - there is no escaping the fact it has been read by someone else and it will show signs of wear and previous use. Overall we expect it to be in very good condition, but if you are not entirely satisfied please get in touch with us
Trustpilot