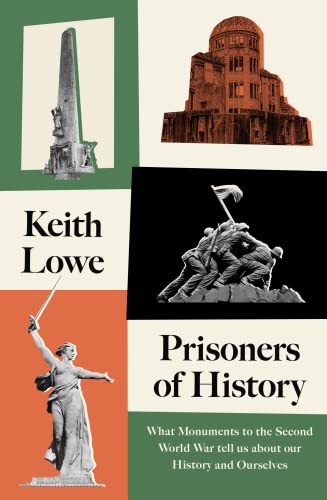 Prisoners of History
by Keith Lowe

What happens when our values change, but what we have set in stone does not?

Prisoners of History: What Monuments to the Second World War Tell Us About Our History and Ourselves by Keith Lowe

What happens when our values change, but what we have set in stone does not?

Humankind has always had the urge to memorialise, to make physical testaments to the past. There's just one problem: when we carve a statue or put up a monument, it can wind up holding us hostage to bad history.

In this extraordinary history book, Keith Lowe uses monuments from around the world to show how different countries have attempted to sculpt their history in the wake of the Second World War, and what these memorials reveal about their politics and national identity today.

Amongst many questions, the book asks: What does Germany signal to today's far right by choosing not to disclose the exact resting place of Hitler? How can a bronze statue of a young girl in Seoul cause mass controversy? What is Russia trying to prove and hide, still building victory monuments at a prolific rate for a war now seventy years over?

As many around the world are questioning who and what we memorialise, Prisoners of History challenges our idea of national memory, history, and the enormous power of symbols in society today.

PRAISE FOR KEITH LOWE'S THE FEAR AND THE FREEDOM: WHY THE SECOND WORLD WAR STILL MATTERS

'Provocative, insightful and at times profoundly moving . . . I hope everyone - and our politicians especially - will read it and learn its vitally important lessons' James Holland

'A masterpiece of historical inquiry: painstakingly researched, cleverly constructed and elegantly written. In surveying such a diverse panorama, Lowe displays a sensitivity to the human condition - how we got to where we are now - that is as unusual as it is welcome' Saul David, Daily Telegraph

'Keith Lowe has written an eloquent meditation on the aftermath and the long psychological tentacles of the Second World War. Beautifully written and profoundly perceptive, The Fear and the Freedom confirms Lowe as one of our finest historians' Antony Beevor

'This powerful book serves as a timely reminder of what our forefathers forged out of the ashes of the Second World War - an international order based on cooperation and interdependence together with a bold, fearless domestic agenda that set about creating a new society' David Lammy

Keith Lowe is the author of Inferno: the Devastation of Hamburg and Savage Continent: Europe in the Aftermath of World War II, which won the 2013 PEN/Hessell-Tiltman Prize for History. In 2017 he published The Fear and the Freedom to great acclaim. His books have been translated into twenty languages.

NGR9780008339548
Prisoners of History: What Monuments to the Second World War Tell Us About Our History and Ourselves by Keith Lowe
Keith Lowe
New
Hardback
HarperCollins Publishers
2020-07-09
320
0008339546
9780008339548
N/A
Book picture is for illustrative purposes only, actual binding, cover or edition may vary.
This is a new book - be the first to read this copy. With untouched pages and a perfect binding, your brand new copy is ready to be opened for the first time.