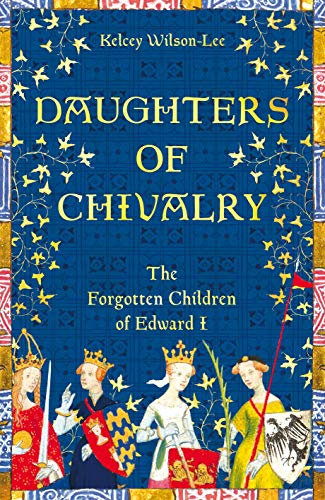 Daughters of Chivalry
by Kelcey Wilson-Lee

In Stock
£13.99
The first full biography of the five remarkable daughters of Edward I.
Like New Very Good
Only 1 left

Daughters of Chivalry: The Forgotten Children of Edward I by Kelcey Wilson-Lee

'A stunning and intricately researched portrayal of five extraordinary women whose stories have until now remained in the shadows. The author shatters many of the myths surrounding the lives of medieval princesses and brings them to life in all their startling modernity.' Tracy Borman, author of The Private Lives of the Tudors and Thomas Cromwell

Virginal, chaste, humble, patiently waiting for rescue by brave knights and handsome princes: this idealized - and largely mythical - notion of the medieval noblewoman still lingers. Yet the reality was very different, as Kelcey Wilson-Lee shows in this vibrant account of the five daughters of the great English king, Edward I.

The lives of these sisters - Eleanora, Joanna, Margaret, Mary and Elizabeth - ran the full gamut of experiences open to royal women in the Middle Ages. Living as they did in a courtly culture founded on romantic longing and brilliant pageantry, they knew that a princess was to be chaste yet a mother to many children, preferably sons, meek yet able to influence a recalcitrant husband or even command a host of men-at-arms. Edward's daughters were of course expected to cement alliances and secure lands and territory by making great dynastic marriages, or endow religious houses with royal favour. But they also skilfully managed enormous households, navigated choppy diplomatic waters and promoted their family's cause throughout Europe - and had the courage to defy their royal father. They might never wear the crown in their own right, but they were utterly confident of their crucial role in the spectacle of medieval kingship.

Drawing on a wide range of contemporary sources, Daughters of Chivalry offers a rich portrait of these spirited Plantagenet women. With their libraries of beautifully illustrated psalters and tales of romance, their rich silks and gleaming jewels, we follow these formidable women throughout their lives and see them - at long last - shine from out of the shadows, revealing what it was to be a princess in the Age of Chivalry.

A much needed book - the first for over a century to turn the spotlight on the daughters of Eleanor of Castile and Edward I. Kelcey Wilson-Lee does a wonderful job of bringing these young women, whose lives have to be reconstructed largely from the small print of the account books, to vibrant life. What is even better, she manages to uncover their very different personalities - right down to their taste in clothes! The royal family of the late thirteenth century truly comes alive in her hands. -- Sara Cockerill, author of Eleanor of Castile
A stunning and intricately researched portrayal of five extraordinary women whose stories have until now remained in the shadows. The author shatters many of the myths surrounding the lives of medieval princesses and brings them to life in all their startling modernity. -- Tracy Borman, author of The Private Lives of the Tudors and Thomas Cromwell

Kelcey Wilson-Lee is a historian of Britain, its art and its architecture. Educated in New York, Oxford, and London, she has published widely on her academic speciality of medieval material culture. Kelcey has taught courses at Cambridge, London, and the Victoria and Albert Museum, and has written articles for English Heritage and for Country Life magazine. She lives with her husband and two sons, and manages the Regional Philanthropy programme at the University of Cambridge. Daughters of Chivalry is her first book.

GOR009782892
Daughters of Chivalry: The Forgotten Children of Edward I by Kelcey Wilson-Lee
Kelcey Wilson-Lee
Used - Like New
Hardback
Pan Macmillan
2019-03-21
352
1509847898
9781509847891
N/A
Book picture is for illustrative purposes only, actual binding, cover or edition may vary.
The book has been read, but looks new. The book cover has no visible wear, and the dust jacket is included if applicable. No missing or damaged pages, no tears, possible very minimal creasing, no underlining or highlighting of text, and no writing in the margins.