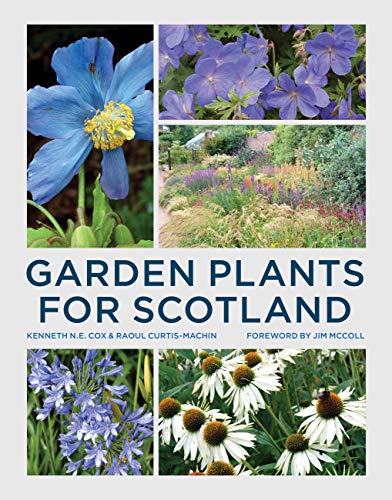 In this book, Scottish gardeners will find accurate information and hundreds of plants ideally suited to where they live.

Scotland is one of the best places in the world to garden. Its maritime climate, ample rainfall, and the rarity of severe droughts and really hot weather mean that huge numbers of plants grow well there. But the climate varies considerably - from the colder, wetter, windier mountainous areas to the west coast where tender plants can be grown outdoors all year round - and choosing plants that are suited to the local conditions is critical to success. Kenneth Cox and Raoul Curtis-Machin have evaluated the performance of thousands of plants in gardens all over Scotland, drawing on the knowledge and experience of many gardeners and nurserymen, and in this book they describe - with over 800 photographs - the most reliable shrubs, conifers, trees, fruit and perennials for Scotland. In this book Scottish gardeners will find accurate information and hundreds of great plants ideally suited to where they live.

Imagine if you were to head off on a tour of Scotland, stopping to chat with the country's garden experts at every town along the way.You could find out which trees stand up to the wind in Shetland, which climbers will survive on a north facing wall and even which plants are widely offered for sale in Scotland but should be left on the shelf. Sadly most of us don't have the time, resources or contacts to take such a trip, but the good news is that two men have done it for us. || An essential companion for any Scottish gardener, both experienced and beginner. || An invaluable source of information for those selecting plants for Scottish gardens. This book certainly lives up to its title. It is informative, authoritative and will be a helpful source of information not just for gardeners in Scotland, but for anyone who gardens in a cold, wet and windly location. || When all the gardening world is focused on plants for drought, it's good to find a book for those who garden in the cold and wetter parts of the north. Garden Plants for Scotland (Frances Lincoln GBP 25/offer GBP 22.50) hits the spot nicely. Kenneth Cox and Raoul Curtis-Machin know that climate well enough (Cox is part of the Glendoick Cox family of nurserymen, who have been collecting and growing rhododendrons for three generations) and so if a plant figures here, even a variety of rose, then you can be pretty sure it's going to do well north of the border and in the soggy, blasted Pennines. So keen are they on reliability that they have set up their own notional bone-hardiness rating in defiance of the Royal Horticultural Society's southern take on hardiness, and also their own Scottish Garden Award, similar to the RHS's Award of Garden Merit, for their best 500 plants, chosen after consultation with experts throughout Scotland. There are lists of plants resistant to deer and rabbits too - there's brave! || Contrary to what many Sassenachs might think, Scotland is one of the best places in the world for gardening, it ample rainfall and lack of severe droughts mean that many plants including raspberries and rhododendrons- thrive there. And yet there have been very few books devoted to Scottish gardening. This excellent volume aims to put that straight... || If you are gardening north of the Border you could not fail to find this book extremely informative, but also a source of amusement and entertainment and there are not many gardening books with this winning combination.
Kenneth Cox is grandson of planthunter, writer and nurseryman Euan Cox and son of Peter Cox VMH. These three were and are considered the world's leading experts on rhododendrons. Himself a nurseryman, Kenneth is managing director of the family firm Glendoick Gardens Ltd near Perth and author of numerous books, including The Encyclopedia of Rhododendron Hybrids (with Peter A. Cox), A Plantsman's Guide to Rhododendrons, Cox's Guide to Choosing Rhododendrons (with Peter Cox), The Encyclopedia of Rhododendron Species (with Peter Cox), Rhododendrons: a Hamlyn Care Manual and Rhododendrons and Azaleas.

Born in Scotland, Raoul Curtis-Machin developed a passionate interest in gardening from the age of thirteen. With an honours degree in landscape management from Reading University, he became Head Gardener for ICI, then set up his own London-based business, designing gardens for celebrity chefs, rock stars, Crown Arab Princes and business tycoons. He has improved gardens and estates throughout Scotland, the UK, France, and Istanbul. After freelancing for a year, Raoul launched The Northern Garden in 2003, a new glossy magazine specifically aimed at gardening in the cooler northern climate. Raoul is currently Landscape Historian with Historic Scotland. He lives with his family in Fife and is also gardening correspondent for The Herald magazine, and a part-time lecturer in garden design. Image (c) Ray Cox