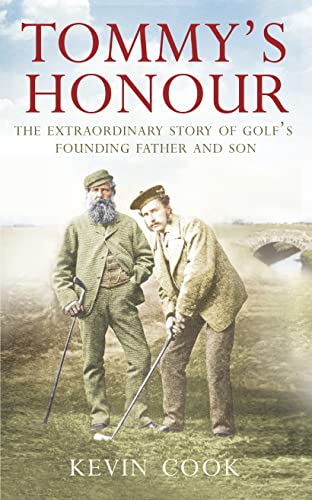 The definitive account of golf's founding father and son, Old and Young Tom Morris. For the first time, the two are portrayed as men of flesh and blood - heroic but also ambitious, loving but sometimes confused and angry. Two men from one household, with ambitions that made them devoted partners as well as ardent foes.

The definitive account of golf's founding father and son, Old and Young Tom Morris. For the first time, the two are portrayed as men of flesh and blood - heroic but also ambitious, loving but sometimes confused and angry. Two men from one household, with ambitions that made them devoted partners as well as ardent foes.

Tommy's Honour is a compelling story of the two Tom Morrises, father and son, both supremely talented golfers but utterly different, constituting a record-breaking golfing dynasty that has never been known before or since.

Father, Old Tom Morris, grew up a stone's throw away from golf's ancestral home at St Andrews, a whisky-fuelled caddie, a wonderful 19th century character who became an Open Champion three times before running the Royal & Ancient, then sole governing body of the game. His son, Young Tom, arguably an even more prodigious talent than his father, was a golfing genius, the Tiger Woods of his era, who at 17 became the youngest player, to this day, to win the Open Championship. He then went on to win it four times in a row, an unprecedented achievement. On one occasion, father and son fought it out at the last hole of the Championship before the son finally triumphed.

But then came the pivotal day that would change their lives forever, the death of Young Tom's wife and unborn child. The cataclysmic events of that day eventually lead to Young Tom's tragic death, aged 24, with his father living on for another 20 years in deep remorse.

So on the one hand, you have the story of one of the most influential figures in the history of golf, a pioneer in the birth of the modern game and of Scottish and Open Championship golf. And on the other hand - you have an extraordinary father-and-son story. It's for every son who ever competed with his father, and every father who has guided his son towards manhood, then found it hard to let go.

`Kevin Cook tells the story with great tenderness and no little humour. He has done a lot of meticulous research and never puts a foot wrong. Tommy's Honour is the stand-out book on a strong short-list' (for the William Hill Sports Book of the Year) Daily Telegraph

' Cook's idiosyncratic history of the early days of professional golf is detailed, loving, and almost novelistic. He captures the incestuous, money-obesessed, sometimes small-minded world of Scottish golf, delightfully.' '...unquestionably a book rather than a product, written for love and not lolly.' The Guardian

Kevin Cook, formerly a staff member at Golf Magazine, has been a sportswriter for 25 years and has spent a lot of that time researching the life of Tom Morris, having heard about the legend while playing the Old Course on his first trip to St Andrews in the late eighties. He was amazed at how even hardcore golf fans knew next to nothing about Tom Morris, modern sport's first superstar. He professes a feeling for this story `in his bones', having been a golfer for 35 years and his late father a professional athlete and serious gambler. Winner of the 1998 Golf Writers' Association of America feature-writing award, he has also written for GQ, Playboy, Vogue, Golf Digest and Sports Ilustrated, and discusses the game as an analyst on ESPN.

GOR001404542
Tommy's Honour: The Extraordinary Story of Golf's Founding Father and Son by Kevin Cook
Kevin Cook
Used - Very Good
Paperback
HarperCollins Publishers
2008-06-02
384
0007271247
9780007271245
N/A
Book picture is for illustrative purposes only, actual binding, cover or edition may vary.
This is a used book - there is no escaping the fact it has been read by someone else and it will show signs of wear and previous use. Overall we expect it to be in very good condition, but if you are not entirely satisfied please get in touch with us.