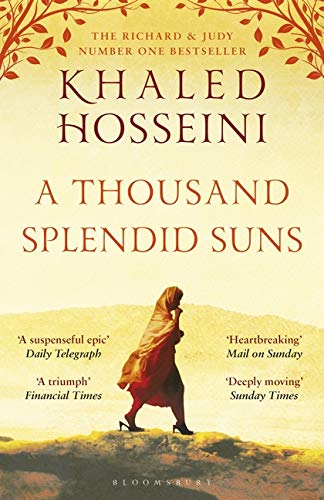 THE RICHARD & JUDY NUMBER ONE BESTSELLER 'A suspenseful epic' Daily Telegraph 'A triumph' Financial Times 'Heartbreaking' Mail on Sunday 'Deeply moving' Sunday Times Mariam is only fifteen when she is sent to Kabul to marry Rasheed. Nearly two decades later, a friendship grows between Mariam and a local teenager, Laila, as strong as the ties between mother and daughter. When the Taliban take over, life becomes a desperate struggle against starvation, brutality and fear. Yet love can move a person to act in unexpected ways, and lead them to overcome the most daunting obstacles with a startling heroism.

In case you're wondering whether A Thousand Splendid Suns is as good as The Kite Runner, here's the answer: No. It's better * Washington Post *
A masterful narrative ... He is a storyteller of dizzying power * Evening Standard *
Hosseini has that rare thing, a Dickensian knack for storytelling * Daily Telegraph *
A gripping tale ... It is, too a powerful portrait of female suffering and endurance under the Taliban * Daily Mail *
A beautifully crafted and disturbing story ... As unforgettable as The Kite Runner, this novel places us in Afghanistan with an open heart -- Isabel Allende
A heartfelt saga that encompasses romance and melodrama, personal and political intrigue, the onslaught of war and dispossession * Independent *
If he cut his teeth by writing about his countrymen, it is the plight of Afghanistan's women that has brought him to realise his full powers as a novelist * The Times *
A Thousand Splendid Suns has all the particularity of a novel and all the force of a fable ... It reads, in many ways, like an old-fashioned romance adventure * Mail on Sunday *
Hosseini has done it again ... A Thousand Splendid Suns is a triumph. In Khaled Hosseini, Afghanistan has at last found a voice * Financial Times *

Khaled Hosseini is the author of The Kite Runner, which was a major film and was a Book of the Decade, chosen by The Times, Daily Telegraph and Guardian. A Thousand Splendid Suns was the Richard & Judy Best Read of the Year in 2008. And the Mountains Echoed was chosen for the Richard & Judy Summer Book Club in 2014, and readers voted it as their favourite of all the titles. Hosseini is also a Goodwill Envoy to the United Nations High Commissioner for Refugees, the UN Refugee Agency, and the founder of The Khaled Hosseini Foundation, a not-for-profit organisation which provides humanitarian assistance to the people of Afghanistan. Sea Prayer, his fourth book, was inspired by Alan Kurdi, the three-year-old Syrian boy whose body washed upon the beach in Turkey in September 2015. Khaled Hosseini was born in Kabul, Afghanistan, and lives in northern California. khaledhosseini.com @khaledhosseini

GOR009875975
A Thousand Splendid Suns by Khaled Hosseini
Khaled Hosseini
Used - Like New
Paperback
Bloomsbury Publishing PLC
2018-08-23
432
1526604752
9781526604750
N/A
Book picture is for illustrative purposes only, actual binding, cover or edition may vary.
The book has been read, but looks new. The book cover has no visible wear, and the dust jacket is included if applicable. No missing or damaged pages, no tears, possible very minimal creasing, no underlining or highlighting of text, and no writing in the margins.