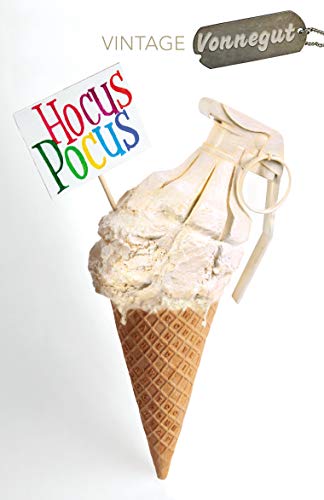 Eugene Debs Hartke, ex-Vietnam vet, ex-college professor, current inmate of Tarkington State Reformatory, awaits his trial and probable death from TB. How did he get there? Via numerous absurd twists of fate which he now narrates on scraps of paper found about the place. Killer of men, romancer of women, compulsive list-maker, Eugene is just one more victim of the world's hocus pocus.

"Vonnegut's best novel in years-funny and prophetic...something special" * The Nation *
"Although it is set in the near future, Hocus Pocus is the most topical, realistic Vonnegut novel to date, and shows the struggle of an artist a little impatient with allegory and more than a little impatient with his own country" * New York Times Book Review *
"Hocus Pocus is, of course, extremely funny. Jokes are told, deadpan and whiplash-sharp; neat, compulsive little anecdotes with stings in the tail jostle one another down the page" * Sunday Correspondent *
"After you have read one of Kurt Vonnegut's gleefully pessimistic novels, his words go on colouring your world for a long time afterwards... not to read him would be to miss out on lessons that need to be learned about the age we live in" * Sunday Times *
"It is all done with voice. Vonnegut is a master of the first-person, manic-depressive stand-up" * Observer *

GOR001218541
Hocus Pocus by Kurt Vonnegut
Kurt Vonnegut
Used - Very Good
Paperback
Vintage Publishing
1991-10-17
288
0099877104
9780099877103
N/A
Book picture is for illustrative purposes only, actual binding, cover or edition may vary.
This is a used book - there is no escaping the fact it has been read by someone else and it will show signs of wear and previous use. Overall we expect it to be in very good condition, but if you are not entirely satisfied please get in touch with us.