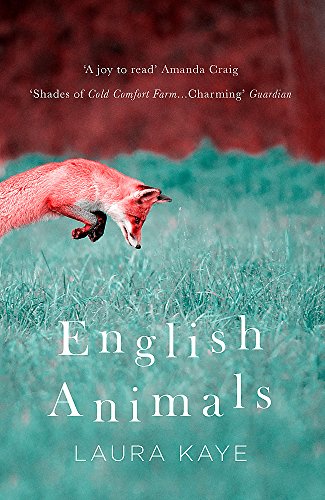 'A beautiful and bold debut' M.J. Hyland, author of the Man Booker-shortlisted Carry Me Down

A funny, subversive and poignant debut novel from an exciting new writer.

'A joy to read' Amanda Craig

English Animals is a subversive, wry debut that fans of Marina Lewycka's A Short History of Tractors in Ukrainian will love.

When Mirka gets a job in a country house in rural England, she has no idea of the struggle she faces to make sense of a very English couple, and a way of life that is entirely alien to her. Richard and Sophie are chaotic, drunken, frequently outrageous but also warm, generous and kind to Mirka, despite their argumentative and turbulent marriage.

Mirka is swiftly commandeered by Richard for his latest money-making enterprise, taxidermy, and soon surpasses him in skill. After a traumatic break two years ago with her family in Slovakia, Mirka finds to her surprise that she is happy at Fairmont Hall. But when she tells Sophie that she is gay, everything she values is put in danger and she must learn the hard way what she really believes in.

Shades of Cold Comfort Farm . . . Kaye has a keen eye for social observation . . . charming -- Lucy Scholes * Observer *
[A] confident novel that engages with love, belonging, prejudice and, above all, quintessential Englishness * Daily Mail *
[A] wry and knowing debut * Stylist *

It's a long time since I've enjoyed any debut novel as much as English Animals. Its command of tone, narrative and character is so assured, and both its wit and perceptiveness about a certain kind of English life make it a joy to read. I am sure it will win several prizes.

I loved the taxidermy ideas and details, and how beautifully they chimed with the human animal scenes presented. The dreadful marriage, the horrific father and above all Mirka herself with her courageous honesty and kindness make this something very special

* Amanda Craig *
A beautiful and bold debut * M.J. Hyland, author of the Man Booker-shortlisted Carry Me Down *
Better than a burst of February sunshine, this is a pitch-perfect story . . . A bubble of pleasurable reading * Sainsbury's Magazine *
Kaye offers an engrossing look at the English countryside, complex in friendship, love, violence and with a touch of mystery. Chronicling a Slovakian immigrant's story in the UK, English Animals is an important novel in an uncertain time. Don't be fooled by the spare, quiet prose; Kaye and her characters will do cartwheels over your expectations * Sara Novic, author of Girl At War *

Kaye's satire usually hits the mark, coming at the expense of rural gastropubs with names like The Snooty Fox,
as well as the world of hipster taxidermy (Mirka starts assembling Dazed and Confused-friendly scenes called things like 'Freelance squirrels' and 'Rats at an office party') . . . Kaye is at her best when she sticks with her scalpel. It's good to see British writers still know how to use it

Laura Kaye grew up in rural Oxfordshire and lives in London. This is her first book.

GOR008573578
English Animals by Laura Kaye
Laura Kaye
Used - Very Good
Paperback
Little, Brown Book Group
2017-09-07
368
034914219X
9780349142197
N/A
Book picture is for illustrative purposes only, actual binding, cover or edition may vary.
This is a used book - there is no escaping the fact it has been read by someone else and it will show signs of wear and previous use. Overall we expect it to be in very good condition, but if you are not entirely satisfied please get in touch with us.