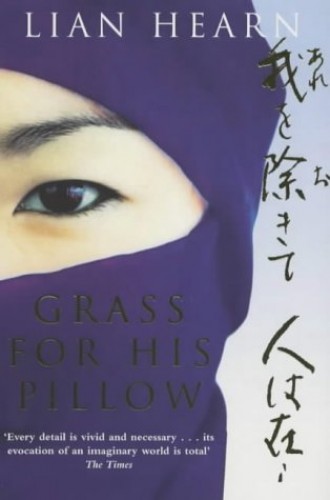 Grass for His Pillow
by Lian Hearn

Grass for His Pillow Summary

Grass for His Pillow: Tales of the Otori Book 2 by Lian Hearn

In the ancient Oriental lands of the Otori, amidst a time of violent war, famine and treacherous alliances, the fate of the young lovers Otori Takeo and Shirakawa Kaede hangs in the balance . . .

Takeo, heir to the great Otori clan, has pledged his life to the secret Tribe. His supernatural skills of virtual invisibility and acute hearing make him their most deadly assassin. But he must deny the solemn oath of vengeance he made, his adopted birthright of wealth, land and power - and his love for Kaede. If he does not devote himself entirely to the brutal ways of the Tribe, they will kill him. Whichever path he choose, it will lead to hardship and sacrifice in the bitter winter of the high mountains, and test him to the limits of his being.

Kaede, heiress to vast lands, is now the valuable pawn of ruthless warlords. She must use her intelligence, beauty and cunning to assert her place in a world of all-powerful men - who must never suspect the dangerous secret she hides.

`The beauty, savagery and strangeness of Hearn's gripping tale is heightened by her exquisite, crystalline prose. The second instalment in the Tales of the Otori is, astonishingly, even better than Across the Nightingale Floor' Independent on Sunday

Lian Hearn studied modern languages at Oxford University and worked as a film critic and arts editor in London before settling in Australia. A lifelong interest in Japan led to the study of the Japanese language, many trips to Japan, and culminated in the writing of the 'Tales of the Otori' series.

GOR000744152
Grass for His Pillow: Tales of the Otori Book 2 by Lian Hearn
Lian Hearn
Used - Very Good
Paperback
Pan Macmillan
2004-04-02
352
0330412736
9780330412735
N/A
Book picture is for illustrative purposes only, actual binding, cover or edition may vary.
This is a used book - there is no escaping the fact it has been read by someone else and it will show signs of wear and previous use. Overall we expect it to be in very good condition, but if you are not entirely satisfied please get in touch with us.