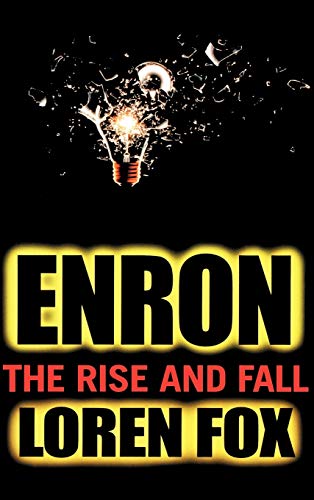 In Stock
£4.99
The Enron story is one that will reverberate in global financial and energy markets and in criminal and civil courts for years to come. This is the 21st century version of the Keating scandal; this decade's LTCM. Investigative journalist Loren Fox provides the most compelling and insightful read into Enron's fall from grace.
Very Good
Only 1 left

Enron: The Rise and Fall by Loren Fox

"I'd say you were a carnival barker, except that wouldn't be fair tocarnival barkers. A carnie will at least tell you up front that he's running a shell game. You, Mr. Lay, were running what purported to be the seventh largest corporation in America."-Senator Peter Fitzgerald (R-IL) to Enron CEO Kenneth Lay, Senate Commerce Science & Transportation's Subcommittee, Hearing on Enron, 2/12/02
The speed of Enron's rise and fall is truly astonishing and perhaps the single most important story of corporate failure in the twenty-first century. In Enron investigative journalist Loren Fox promises readers nothing short of the most compelling and insightful investigation into Enron's meteoric ascent-regarded by Wall Street and the media as the epitome of innovation-and its spectacular fall from grace. In a lively and authoritative manner, Fox discusses how the biggest corporate bankruptcy in American business history happened, why for so long no one (except for an enlightened few) saw it coming, and what its impact will be on financial markets, the U.S. economy, U.S. energy policy, and the public for years to come. With access to many company insiders, Fox's intriguing account of this corporate debacle also provides an overview of the corporate culture and business model that led to Enron's high-flying success and disastrous failure. The story of Enron is one that will reverberate in global financial and energy markets as well as in criminal and civil courts for years to come. Rife with all the elements of a classic thriller-scandal, dishonest accounting, personal greed, questionable campaign contributions, suicide-Enron captures the essence of a company that went too far too fast.

"Of the three books, this one offers the most detailed explanation of Enron as a business." ( New York Times, October 27, 2002)

"Fox fills the void left by Lay and other Enron top dogs in swift, building-block fashion, producing a ground-up view of why the "Crooked E" colossus rose and fell." (Barron's, November 2002)

"...a gripping read with plenty of lessons for companies that do not want to become victims of their own success..." (Lloyds List, 6 December 2002)

"Loren Fox is a business writer who does not shy away from the complexities of Enron's business and financial dealings." (The Economist, January 11, 2003)

"...this one impresses by its sheer mass and wealth of detail..." (Mortgage Finance Gazette, February 2003)

struck the right balance and given us a book, which is both entertaining and highly informative (AccountingWeb, 19 February 2003)

LOREN FOX is a former senior editor at Business 2.0, the award-winning business magazine, and a leading authority on business strategy. Previously, Fox was finance editor of Upside magazine. He also spent five and one-half years as editor and reporter for Dow Jones News Service, where he covered the energy industry and Enron. His work has appeared in The Wall Street Journal, Barron's, Salon.com, and other media.

GOR000925063
Enron: The Rise and Fall by Loren Fox
Loren Fox
Used - Very Good
Hardback
John Wiley and Sons Ltd
2002-10-18
384
0471237604
9780471237600
N/A
Book picture is for illustrative purposes only, actual binding, cover or edition may vary.
This is a used book - there is no escaping the fact it has been read by someone else and it will show signs of wear and previous use. Overall we expect it to be in very good condition, but if you are not entirely satisfied please get in touch with us.