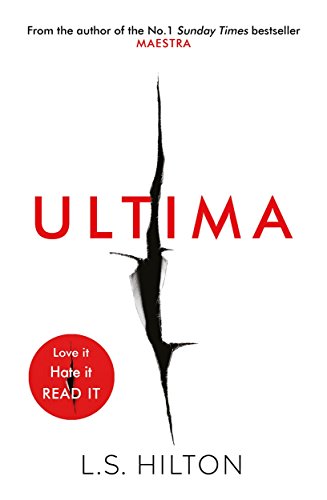 Ultima: From the bestselling author of the No.1 global phenomenon MAESTRA. Love it. Hate it. READ IT! by LS Hilton

The shockingly audacious conclusion to the international bestselling phenomenon that began with Maestra. If you can't beat them - kill them First there was Maestra. Then there was Domina. Now - there is Ultima. Glamorous international art-dealer Elizabeth Teerlinc knows a thing or two about fakes. After all, she is one herself. Her real identity, Judith Rashleigh, is buried under a layer of lies. Not to mention the corpses of the men foolish enough to get in her way. But now, caught in the murderous crossfire between a Russian Mafia boss and a corrupt Italian police detective, Judith is forced to create an even more daring work of art - a fake masterpiece she must take to the world-famous auction house where she used to be a lowly assistant and sell for $150 million. For Judith the prospect of putting one over her loathsome former employer and the world's art establishment is almost as thrilling as the extreme sex she's addicted to - especially when the price of failure is a bullet in the back of the head. But exposing her new identity to the glare of the spotlight puts her at risk of an even greater danger. Like a beautiful painting stripped of its layers of varnish, something altogether different could be revealed. A truth about her past even Judith might find shocking. Praise for the Maestra series 'Like a ritzy 50 Shades meets The Da Vinci Code . . . ' INDEPENDENT 'Funny and clever, entertaining and well written' THE TIMES 'A rip-roaring read' DAILY MAIL 'Fantastically good fun . . . L.S. Hilton can write' THE SUNDAY TIMES 'Brimming with scandal, intrigue and mystery' HEAT 'Deliciously decadent . . . a glamorous and racy adventure' SUNDAY MIRROR 'Patricia Highsmith crossed with Gone Girl' HARPERS BAZAAR 'Smart, pacy and very rude' GLAMOUR 'A gloriously dark thriller' GRAZIA 'A whirlwind thriller' COSMOPOLITAN 'At least two jaw-on-the-floor moments and sex scenes that would make Christian Grey blush' RED MAGAZINE
DOMINA included in a feature by Sarra Manning on the best new thrillers to look out for in 2017- 'The sequel to last year's bestseller, Maestra, Domina sees the return of Judith Rashleigh in what author, LS Hilton, describes "as the calm before the storm." * Redmagazine.co.uk *
DOMINA picked as a big book of 2017 - 'Smart and sexy heroine Judith Rashleigh returns in the second of three psychological thrillers from the author of Maestra.' * The Sun *
Sexy, smart and gripping * Sunday People *
Another razor-sharp romp * Sunday Mirror *
A fast-paced, sexy thriller * ST Style *
Funny, racy and gloriously shocking * Look Magazine *
Hilton has created a masterpiece. Every move Judith makes is calculated and you can't help but be in awe of this daring plot. If you are willing to give it a go, you will be absorbed by a very slick and clever plot that will have you questioning artwork in museums... * Chloe Douglas Blog *
The outrageous adventures of art expert, female serial killer (but only for a reason) and femme fatale extraordinaire Judith Rashleigh come to a suitable if amoral ending in the final volume of the trilogy that began with MAESTRA and was followed by DOMINA. Crisscrossing the Mediterranean, leaving a trail of mayhem, deception and panting men, Judith is now at the heart of yet another art forgery conspiracy that brings all the random threads peppering the trilogy finally together. A terribly guilty pleasure of a read and incredible fun if you leave your credulity at the door (alongside your clothes). Hilton writes like a dream and has a strong feel for the smells and tastes of exotic places, alongside her heroine's expensive tastes, erotic exploits and wonderfully unprincipled actions. It's as if Patricia Highsmith's ambiguous Mr Ripley had been given a change of sex and actually found transgression a joy. Not for the faint-hearted * Crime Time *
L.S Hilton is seriously underrated in the literary world and I'm intrigued to see what she will do next. Ultima is the perfect end to a gripping; brutal and mysterious series and the slick plot will have you re-reading for clues you may have missed * Memoirs and Musings *
Ever ruthless when she wants something and refusing to accept the person she is and always has been she has carefully laid what could be a pathway to a new future...ruthless, cunning and totally without any sort of moral compass * Blue Wolf Reviews *
With writing that is as stiletto-heel sharp and provocative as Hilton's previous novels, Ultima delivers the same profound, decadent and shockingly-uninhibited journey through its central character's bloodlust and extreme sexual escapades alongside the glamour of the bass-tag art scene of the novel's setting. Judith is wise-cracking, unapologetic, and (if they ever crossed paths), would certainly give Mr. Kiss-Kiss-Bang-Bang a run for his money - and his life. Hilton is once again running the gamut of controversy with yet another uncompromising thriller that makes few excuses for breaking the rules...this is at the top of ER's belated Summer read pile * Erotic Review Magazine *
if you want a slightly steamier thriller, one more eighteen than fifteen certificate, with and intriguing, liberated and strong female lead, then this is probably the series for you * Jen Med Book Reviews *
L.S. Hilton is a writer and journalist who presently lives in London.
GOR009021640
9781785760891
1785760890
Ultima: From the bestselling author of the No.1 global phenomenon MAESTRA. Love it. Hate it. READ IT! by LS Hilton
LS Hilton
Used - Very Good
Hardback
Zaffre
2018-03-28
352
N/A
Book picture is for illustrative purposes only, actual binding, cover or edition may vary.
This is a used book - there is no escaping the fact it has been read by someone else and it will show signs of wear and previous use. Overall we expect it to be in very good condition, but if you are not entirely satisfied please get in touch with us
Trustpilot