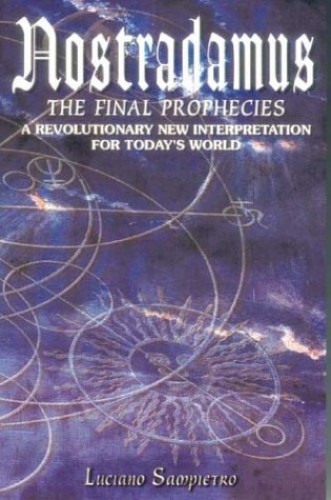 This completely new and revolutionary interpretation of Nostradamus's prophecies offers a terrifying glimpse into a future potentially filled with conflict on an epic scale. Luciano Sampietro explains that he has cracked Nostradamus s complicated code, which was written in the language of the alchemists and is full of concealed meanings, anagrams, symbolic codes, puzzling syntax, and added and subtracted letters. These new translations unravel the hidden chronology of the prophecies and reveal that Nostradamus's apocalyptic predictions deal with the immediate future. Sampietro s interpretations reveal that Nostradamus predicted the September 11 attacks and the current turmoil in the Middle East. A future stock market collapse, the rise of an antichrist figure who will lead the world into global conflict, and a period of devastation that will lead to world war in 2005 are also predicted. With these revelations, Sampietro has clarified meanings that have remained obscure for centuries and presents Nostradamus as witness of the crucial moments in the history of humanity.
"

"Did Nostradamus predict the twin towers? If he did, what's next is even more terrifying." --"Daily Mail"

Did Nostradamus predict the twin towers? If he did, what's next is even more terrifying. "Daily Mail"
"

Luciano Sampietro is a leading criminal lawyer in Italy and is the president of the Penal Chamber of Trieste. He has studied Latin and Greek extensively.

GOR002805476
Nostradamus: The Final Prophecies - A New, Revolutionary Interpretation for Today's World by Luciano Sampietro
Luciano Sampietro
Used - Very Good
Paperback
Profile Books Ltd
2002-04-30
256
0285636391
9780285636392
N/A
Book picture is for illustrative purposes only, actual binding, cover or edition may vary.
This is a used book - there is no escaping the fact it has been read by someone else and it will show signs of wear and previous use. Overall we expect it to be in very good condition, but if you are not entirely satisfied please get in touch with us.