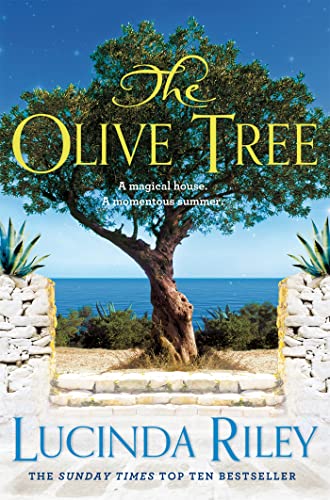 The Olive Tree
by Lucinda Riley

The Olive Tree by Lucinda Riley

The Olive Tree is the number one international bestseller from Lucinda Riley, author of the bestselling Seven Sisters series.

*This title is also published as Helena's Secret.*

A magical house. A momentous summer.

It has been twenty-four years since a young Helena spent a magical holiday in Cyprus, where she fell in love for the first time. When the now crumbling house, 'Pandora', is left to her by her godfather, she returns to spend the summer there with her family.

Yet, as soon as Helena arrives at Pandora, she knows that its idyllic beauty masks a web of secrets that she has kept from William, her husband, and Alex, her son. At the difficult age of thirteen, Alex is torn between protecting his beloved mother, and growing up. And equally, desperate to learn the truth about his real father . . .

When, by chance, Helena meets her childhood sweetheart, a chain of events is set in motion that threatens to make her past and present collide. Both Helena and Alex know that life will never be the same, once Pandora's secrets have been revealed . . .

It will whisk you away to the glorious sunshine of Cyprus . . . refreshingly different -- Veronica Henry * Daily Express *
A dazzling contemporary novel . . . Brimming with the colour, atmosphere and sultry heat of beautiful Cyprus, this is a gripping story about family relationships across all generations, the ties that bind us with sometimes invisible cords and the complex nature of 'family' in the modern world . . . Riley writes with both insight and empathy . . . a stunning tale of our times from a master storyteller * Lancashire Evening Post *

Lucinda's novels include The Seven Sisters, a seven-book series telling the story of adopted sisters and based allegorically on the mythology of the famous star constellation. Book one, The Seven Sisters, and Book two, The Storm Sister, have been No. 1 bestsellers in Europe, and the rights to a multi-season TV series have already been optioned by a Hollywood production company. The Storm Sister has been nominated for the prestigious Premio Bancarella literary prize in Italy.

Lucinda is also the author of a contemporary novel The Olive Tree, set during one long hot summer in Cyprus, and based on a family holiday. Lucinda and her son Harry have personally narrated the audiobook together.

She is also rewriting and releasing a number of books originally published when writing under her maiden name of Lucinda Edmonds, including The Italian Girl and The Angel Tree.

Lucinda lives with her husband and four children on the North Norfolk coast in England and West Cork, Ireland.

GOR008559239
The Olive Tree by Lucinda Riley
Lucinda Riley
Used - Very Good
Paperback
Pan Macmillan
2017-07-25
608
1509824758
9781509824755
N/A
Book picture is for illustrative purposes only, actual binding, cover or edition may vary.
The book has been read, but looks new. The book cover has no visible wear, and the dust jacket is included if applicable. No missing or damaged pages, no tears, possible very minimal creasing, no underlining or highlighting of text, and no writing in the margins.