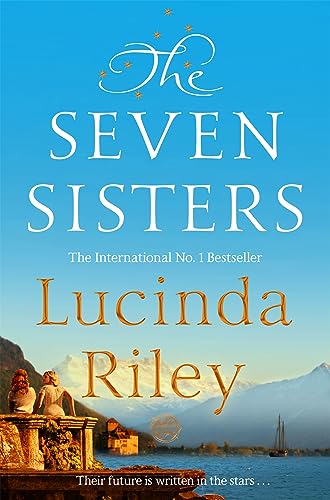 The Seven Sisters
by Lucinda Riley

The Seven Sisters by Lucinda Riley

The Seven Sisters is a sweeping epic tale of love and loss by the international number one bestseller Lucinda Riley.

Maia D'Apliese and her five sisters gather together at their childhood home - a fabulous, secluded castle situated on the shores of Lake Geneva - having been told that their beloved adoptive father, the elusive billionaire they call Pa Salt, has died.

Each of them is handed a tantalising clue to their true heritage - a clue which takes Maia across the world to a crumbling mansion in Rio de Janeiro in Brazil . . .

Eighty years earlier, in the Belle Epoque of Rio, 1927, Izabela Bonifacio's father has aspirations for his daughter to marry into aristocracy. But Izabela longs for adventure, and convinces him to allow her to accompany the family of a renowned architect on a trip to Paris. In the heady, vibrant streets of Montparnasse, she meets ambitious young sculptor Laurent Brouilly, and knows at once that her life will never be the same again.

A brilliant page-turner just soaked in glamour and romance * Daily Mail *
Riley is one of the strongest authors in this genre of historical fiction . . . excellent historical detail, heart-wrenching romance, and an engaging mystery -- Historical Novel Society
Like the famous statue that brought the lovers together and hovers over Rio today, the story is elegantly sculpted and rich with history -- Library Journal, USA

GOR009605074
The Seven Sisters by Lucinda Riley
Lucinda Riley
The Seven Sisters
Used - Very Good
Paperback
Pan Macmillan
2018-10-18
672
1529003458
9781529003451
N/A
Book picture is for illustrative purposes only, actual binding, cover or edition may vary.
This is a used book - there is no escaping the fact it has been read by someone else and it will show signs of wear and previous use. Overall we expect it to be in very good condition, but if you are not entirely satisfied please get in touch with us.