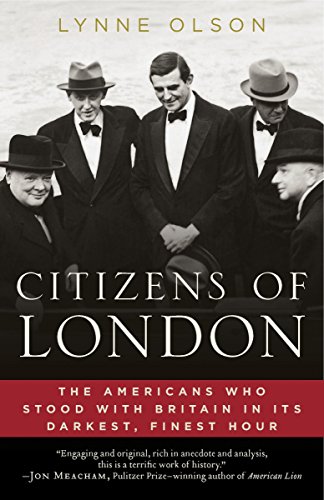 Citizens of London
by Lynne Olson

Citizens of London: The Americans Who Stood with Britain in its Darkest, Finest Hour by Lynne Olson

Olson sifts through the immense amount of material on the period and crafts a cracking good read....Finely done. * New York Post *
I don"t live in London anymore and I couldn"t afford it even if I wanted to, but the city beloved by Winant and Murrow will always mean as much to me as it did to them and their deep attachment to it is perhaps the strongest thing that resonates from this wonderful book. * War History Online 25/03/2015 *

Lynne Olson, a former Moscow correspondent for the Associated Press and White House correspondent for the Baltimore Sun, is the author of Troublesome Young Men and Freedom's Daughters and co-author, with her husband, Stanley Cloud, of A Question of Honor and The Murrow Boys. She lives in Washington, D.C.

GOR004728785
Citizens of London: The Americans Who Stood with Britain in its Darkest, Finest Hour by Lynne Olson
Lynne Olson
Used - Very Good
Paperback
Presidio Press
2010-02-02
496
0812979354
9780812979350
N/A
Book picture is for illustrative purposes only, actual binding, cover or edition may vary.
This is a used book - there is no escaping the fact it has been read by someone else and it will show signs of wear and previous use. Overall we expect it to be in very good condition, but if you are not entirely satisfied please get in touch with us.