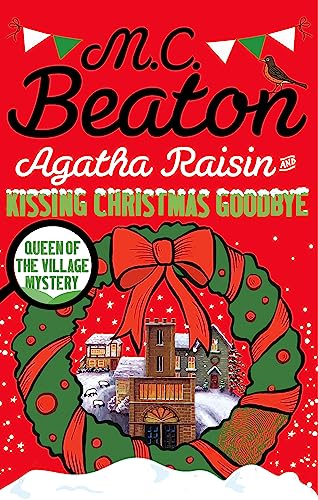 Yuletide overindulgence on the poison front . . .

During the dark, grey days of early December Agatha is obsessed by two things - the looming festivities, and her ex, James Lacey. In order to drive the latter from her thoughts, Agatha concentrates on planning the perfect Christmas for her friends.

Even the murder of a Mrs Tamworthy, poisoned with hemlock, does little to distract her and yet it should, as Mrs Tamworthy had written to Agatha, telling her that one of her family wanted to see her dead before the year was out. So slightly guiltily (and belatedly), Agatha sets out to solve the case before the 25th rolls around . . .

'The detective novels of M.C. Beaton, a master of outrageous black comedy, have reached cult status' The Times

GOR008007443
Agatha Raisin and Kissing Christmas Goodbye by M.C. Beaton
M.C. Beaton
Christmas Fiction
Used - Very Good
Paperback
Little, Brown Book Group
2016-07-07
272
1472121422
9781472121424
N/A
Book picture is for illustrative purposes only, actual binding, cover or edition may vary.
This is a used book - there is no escaping the fact it has been read by someone else and it will show signs of wear and previous use. Overall we expect it to be in very good condition, but if you are not entirely satisfied please get in touch with us.