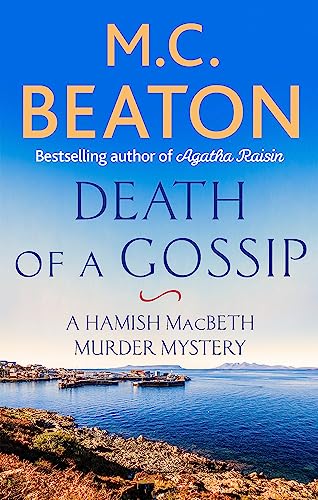 Death of a Gossip
by M.C. Beaton

Death of a Gossip Summary

Death of a Gossip by M.C. Beaton

When society widow and gossip columnist Lady Jane Winters joins the local fishing class she wastes no time in ruffling the feathers - or should that be fins? - of those around her.

Among the victims of her sharp tongue is Lochdubh constable Hamish Macbeth, yet not even Hamish thinks someone would seriously want to silence Lady Jane's shrill voice permanently - until her strangled body is fished out of the river.

Now with the help of the lovely Priscilla Halburton-Smythe, Hamish must steer a course through the choppy waters of the tattler's life to find a murderer. But with a school of suspects who aren't willing to talk, and the dead woman telling no tales, Hamish may well be in over his head for he knows that secrets are dangerous, knowledge is power, and killers when cornered usually do strike again.

Customer Reviews - Death of a Gossip

Death of a Gossip Reviews

GOR008151754
Death of a Gossip by M.C. Beaton
M.C. Beaton
Hamish Macbeth
Used - Very Good
Paperback
Little, Brown Book Group
2017-02-02
224
1472124065
9781472124067
N/A
Book picture is for illustrative purposes only, actual binding, cover or edition may vary.
This is a used book - there is no escaping the fact it has been read by someone else and it will show signs of wear and previous use. Overall we expect it to be in very good condition, but if you are not entirely satisfied please get in touch with us.