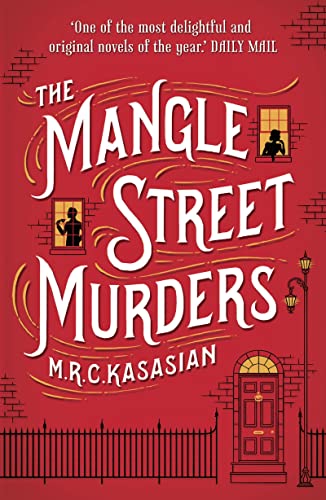 'Delightful and original ... A series that could well become a cult' DAILY MAIL.

Queen Victoria may sit on the throne and Robert Peel's bobbies walk the street, but London is still haunted by the spectre of Spring-heeled Jack.

The demons of vice and poverty rule the capital: ruffian gangs, pickpockets, prostitutes and vagrants clog the streets with their iniquity.

Until, that is, the arrival of his ward March Middleton and the vicious Whitechapel murder that follows hard on her heels...

Set between the refined buildings of Victorian Bloomsbury and the stinking streets of London's East End, The Mangle Street Murders is for those who like their crime original, atmospheric, and very, very funny.

Praise for THE MANGLE STREET MURDERS:

Read the whole series:
THE MANGLE STREET MURDERS.
THE CURSE OF THE HOUSE OF FOSKETT.
DEATH DESCENDS ON SATURN VILLA.
THE SECRETS OF GASLIGHT LANE.
DARK DAWN OVER STEEP HOUSE.

'One of the most delightful and original new novels of the year, this is the first in a series that could well become a cult. Grice and Middleton promise to become a positive treat. Catch them now' Daily Mail.
'Kasasian's sparkling debut introduces a memorable new detective duo' Publishers Weekly.
'Funny, fresh and sharply plotted ... starring a detective duo to rival Holmes and Watson' Goodreads.

M.R.C. Kasasian was raised in Lancashire. He has had careers as varied as a factory hand, wine waiter, veterinary assistant, fairground worker and dentist. He is the author of the much loved Gower Street Detective series, five books featuring personal detective Sidney Grice and his ward March Middleton. The first book in his new series, Betty Church and the Suffolk Vampire, is set in a sleepy seaside town during World War II and is out this year. He lives with his wife, in Suffolk in the summer and in Malta in the winter.

GOR007988045
The Mangle Street Murders by M. R. C. Kasasian
M. R. C. Kasasian
The Gower Street Detective Series
Used - Like New
Paperback
Head of Zeus
2014-02-27
336
1781851867
9781781851869
N/A
Book picture is for illustrative purposes only, actual binding, cover or edition may vary.
This is a used book - there is no escaping the fact it has been read by someone else and it will show signs of wear and previous use. Overall we expect it to be in very good condition, but if you are not entirely satisfied please get in touch with us.