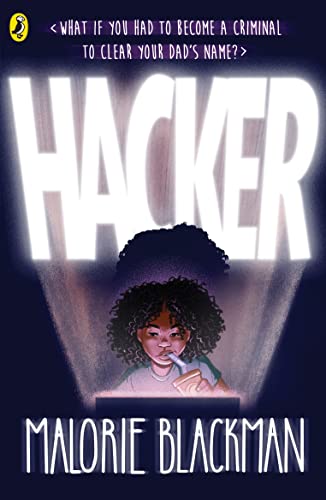 Used Price
£3.19
New RRP £6.99
Free Shipping in the UK
Please identify yourself . . . When Vicky's father is arrested, accused of stealing over a million pounds from the bank where he works, she is determined to prove his innocence. There's only one way - to attempt to break into the bank's computer files.
Reviews:
Trustpilot
Like New Very Good Good Well Read

MESSAGE: This is the system operator. Who is using this account? Please identify yourself . . . When Vicky's father is arrested, accused of stealing over a million pounds from the bank where he works, she is determined to prove his innocence. But how? There's only one way - to attempt to break into the bank's computer files. Even if Vicky is the best hacker in the world, will she find the real thief before they find her?

Malorie Blackman has written over seventy books for children and young adults, including the Noughts & Crosses series, Thief and a science-fiction thriller, Chasing the Stars. Many of her books have also been adapted for stage and television, including a BAFTA-award-winning BBC production of Pig-Heart Boy and a Pilot Theatre stage adaptation by Sabrina Mahfouz of Noughts & Crosses. There is also a major BBC production of Noughts & Crosses, with Roc Nation (Jay-Z's entertainment company) curating the soundtrack as executive music producer. In 2005 Malorie was honoured with the Eleanor Farjeon Award in recognition of her distinguished contribution to the world of children's books. In 2008 she received an OBE for her services to children's literature, and between 2013 and 2015 she was the Children's Laureate. Most recently Malorie wrote for the Doctor Who series on BBC One, and the fifth novel in her Noughts & Crosses series, Crossfire, was published by Penguin Random House Children's in summer 2019.

GOR008631903
Hacker by Malorie Blackman
Malorie Blackman
Used - Like New
Paperback
Random House Children's Publishers UK
2004-02-05
240
0552551643
9780552551649
N/A
Book picture is for illustrative purposes only, actual binding, cover or edition may vary.
The book has been read, but looks new. The book cover has no visible wear, and the dust jacket is included if applicable. No missing or damaged pages, no tears, possible very minimal creasing, no underlining or highlighting of text, and no writing in the margins.