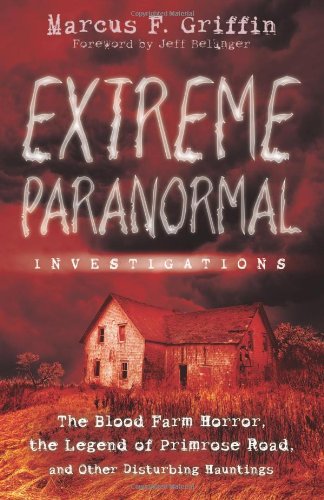 In Stock
£14.99
Inlcudes true-case files such as investigations of Okie Pinokie and the Demon Pillar Pigs, the Ghost Children of Munchkinland Cemetery, and the Legend of Primrose Road.
Very Good
Only 3 left

Extreme Paranormal Investigations: The Blood Farm Horror, the Legend of Primrose Road, and Other Disturbing Hauntings by Marcus F. Griffin

Set foot inside the bone-chilling, dangerous, and sometimes downright terrifying world of extreme paranormal investigations. Join Marcus F. Griffin, Wiccan priest and founder of Witches in Search of the Paranormal (WISP), as he and his team explore the Midwest's most haunted properties. These investigations include the creepiest-of-the-creepy cases WISP has tackled over the years, many of them in locations that had never before been investigated. These true-case files include investigations of Okie Pinokie and the Demon Pillar Pigs, the Ghost Children of Munchkinland Cemetery, and the Legend of Primrose Road. Readers will also get an inside glimpse of previously inaccessible places, such as the former Jeffrey Dahmer property as WISP searches for the notorious serial killer's spirit, and the farm that belonged to Belle Gunness, America's first female serial killer and the perpetrator of the Blood Farm Horror.

A hell of a trip. Highly recommended."--Michael McCarty, Bram Stoker Finalist and author of Monster Behind the Wheel

Marcus F. Griffin is an ordained Wiccan priest with well over twenty-nine years of experience and has been studying paranormal activity for nearly as long. A columnist for the popular website Ghostvillage.com, Griffin has served as a metaphysical and paranormal research consultant on documentary films, broadcast programmes, and books.

GOR004667292
Extreme Paranormal Investigations: The Blood Farm Horror, the Legend of Primrose Road, and Other Disturbing Hauntings by Marcus F. Griffin
Marcus F. Griffin
Used - Very Good
Paperback
Llewellyn Publications,U.S.
2011-10-08
288
0738726974
9780738726977
N/A
Book picture is for illustrative purposes only, actual binding, cover or edition may vary.
This is a used book - there is no escaping the fact it has been read by someone else and it will show signs of wear and previous use. Overall we expect it to be in very good condition, but if you are not entirely satisfied please get in touch with us.