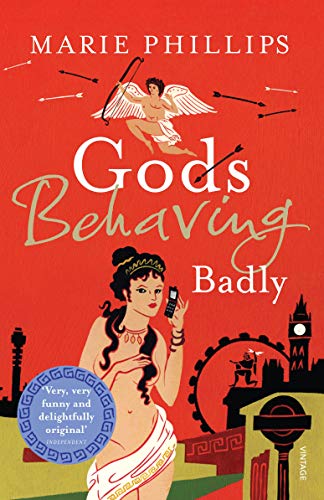 In Stock
£3.59
But for Artemis (goddess of hunting, professional dog walker), Aphrodite (goddess of beauty, telephone sex operator) and Apollo (god of the sun, TV psychic) there's no way out...
Very Good
8 in stock

Being immortal isn't all it's cracked up to be. Life's hard for a Greek god in the 21st century: nobody believes in you any more, even your own family doesn't respect you, and you're stuck in a delapidated hovel in north London with too many siblings and not enough hot water. But for Artemis (goddess of hunting, professional dog walker), Aphrodite (goddess of beauty, telephone sex operator) and Apollo (god of the sun, TV psychic) there's no way out... Until a meek cleaner and her would-be boyfriend come into their lives, and turn the world literally upside down. Gods Behaving Badly is that rare thing, a charming, funny, utterly original first novel that satisfies the head and the heart.

"Very, very funny and delightfully original as well as acutely clever in a makes-you-think-about-contemporary-morality-without-realising-it kind of way... this novel will not only make you laugh and give you a nice, warm, fuzzy feeling, it will also provide a good basic grounding in Greek mythology" * Independent *
"What makes the novel stand out - and it really does stand out - is its originality and lightness of touch" * Daily Telegraph *
"The Olympians are immortal - this we all know. But it has taken Marie Phillips' wit to put them back where they belong - into a decrepit 21st-century London bedsit. It is all very, very funny...this book charms and provokes in a paragraph. I am writing this in Delphi, dangling my feet in Apollo's sacred spring - the water is said to bring the muse. Phillips clearly has a bottle of it on her desk" -- Bettany Hughes * The Times *
"An absolutely delightful novel" * Scotland on Sunday *
"Ingeniously imagined and satisfyingly lusty" * Guardian *

Marie Phillips was born in London in 1976. She studied anthropology and documentary making, and worked as a TV researcher for several years. More recently she has worked as an independent bookseller whilst writing Gods Behaving Badly.

GOR000420789
Gods Behaving Badly by Marie Phillips
Marie Phillips
Used - Very Good
Paperback
Vintage Publishing
2008-05-29
288
0099513021
9780099513025
N/A
Book picture is for illustrative purposes only, actual binding, cover or edition may vary.
This is a used book - there is no escaping the fact it has been read by someone else and it will show signs of wear and previous use. Overall we expect it to be in very good condition, but if you are not entirely satisfied please get in touch with us.