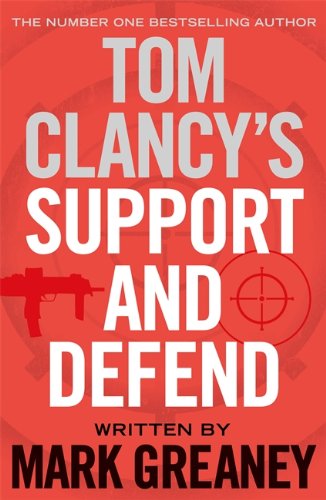 Dominic Caruso. Nephew of President Jack Ryan. FBI agent and operator for The Campus, a top secret intelligence agency that works off the books for the US government. Already scarred by the death of his brother, Caruso is devastated when he can't save a friend and his family from a terrorist attack.

Over the course of three decades, Tom Clancy created a world alive with prescient action and remarkable individuals. In Support and Defend, Dominic Caruso is presented with the deadliest challenge of his career.
The next installment in the Dominic Caruso series, Tom Clancy's Full Force and Effect, will be published by Penguin December 2014.

One of Tom Clancy's most storied characters, Dominic Caruso, is the only one who can stop America's secrets from falling into enemy hands in this blockbuster new novel written by Clancy's long-time co-author.

Dominic Caruso. Nephew of President Jack Ryan. FBI agent and operator for The Campus, a top secret intelligence agency that works off the books for the U.S. government. Already scarred by the death of his brother, Caruso is devastated when he can't save a friend and his family from a terrorist attack.

Ethan Ross was a mid-level staffer for the National Security Council. Now he's a wanted fugitive on the run with a micro-drive that contains enough information to wreck American intelligence efforts around the world. The CIA is desperate to get the drive back, but so are the Russians and various terrorist groups, all of whom are closer to catching the fugitive. Only Caruso stands in their way, but can he succeed without the aid of his Campus colleagues?

Support and Defend is a brand new blockbuster thriller featuring Dominic Caruso. Full Force and Effect, the next adventure in the series, will be available from Penguin in Hardback December 2014.

'There's hardly another thriller writer alive who can fuel an adrenaline surge the way Clancy can' Daily Mail
'Exhilarating. No other novelist is giving so full a picture of modern conflict' Sunday Times

Thirty years ago Tom Clancy was a Maryland insurance broker with a passion for naval history. Years before, he had been an English major at Baltimore's Loyola College and had always dreamed of writing a novel. His first effort, The Hunt for Red October, sold briskly as a result of rave reviews, then catapulted on to the New York Times bestseller list after President Reagan pronounced it 'the perfect yarn'. From that day forward, Clancy established himself as an undisputed master at blending exceptional realism and authenticity, intricate plotting, and razor-sharp suspense. He passed away in October 2013.
Mark Greaney has a degree in international relations and political science and is pursuing his master's in intelligence studies with a concentration in criminal intelligence. He is the author of The Gray Man, On Target, and Ballistic.

Exhilarating. No other novelist is giving so full a picture of modern conflict * Sunday Times *
Mark Greaney is the co-author of three Number One Sunday Times bestellers with Tom Clancy: Locked On, Threat Vector and Command Authority. In his research for these novels, Greaney travelled to seven countries and trained alongside military and law enforcement in the use of firearms, battlefield medicine and close-range combat tactics. He now writes for the Tom Clancy series of novels alongside Grant Blackwood. He lives in Memphis, Tennessee.
GOR005969848
9780718180447
0718180445
Tom Clancy's Support and Defend by Mark Greaney
Mark Greaney
Used - Very Good
Hardback
Penguin Books Ltd
2014-07-31
512
N/A
Book picture is for illustrative purposes only, actual binding, cover or edition may vary.
This is a used book - there is no escaping the fact it has been read by someone else and it will show signs of wear and previous use. Overall we expect it to be in very good condition, but if you are not entirely satisfied please get in touch with us
Trustpilot